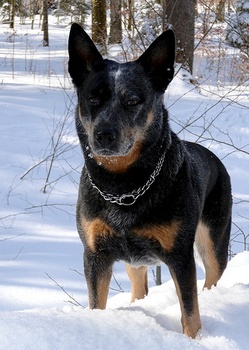 The ACD is an active medium-sized, short-coated dog that possesses a high intelligence and which forms strong bonds with its owners. As cattle-driving dogs, ACD’s would nip the heels (hence the moniker) of stubborn cows to keep them moving. Because of their strong herding instincts and close relationship formed with cattlemen moving throughout the countryside, the breed retains a few of those necessary attributes. Namely, they’re prone to nipping, especially at the heels of running children (which should not be taken as biting or aggression), and they tend to be aloof towards strangers – which can make them a serviceable guard dog. Because of their history of working independently, ACDs don’t always get along with other dogs. Proper socialization and familiarity can help alleviate the issue, but they’d rather spend time with their human than other dogs. They are one-man (or one-family) dogs that willing follow their owners with devotion and will defend them without hesitation.

Intelligent and hard-working animals, ACDs need a job to perform. They will blossom when trained and given a challenging task. If you’re not using them as a cattle dog on a working ranch, agility, obedience or herding trials are all suitable psychological and physical outlets. They’re great companions for active people that enjoy pursuits such as hiking and mountain biking.

A hardy dog, ACDs are easy to care for (provided physical and mental stimulation are provided). Their short coat only needs occasional brushing, and they’re more prone to injuries than illnesses due to their high-energy, active lifestyle. As medium-sized dogs, they enjoy a lifespan of 11 to 15 years, with an average being 13 or so years of age.

Australian cattle dogs are an overall healthy breed, with most issues having to do with musculoskeletal problems. However, the Australian cattle dog can carry a recessive piebald allele that produces white in the coat and skin that are linked to congenital hereditary deafness.

If you order a panel test for all five diseases by Oct. 6, you can receive 15-percent off the cost of the order by using the code “FBACD” at checkout.

Inborn Errors of Metabolism: The Invisible Genetic Diseases of Dogs?