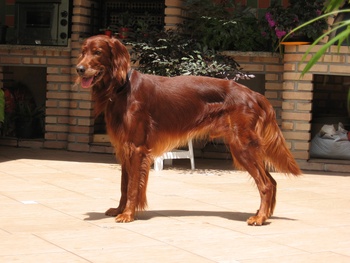 Show-bred dogs range between 60 and 70 pounds and stand approximately 27 inches tall, while field-bred red setters tend to be smaller – around 50 pounds, and with a coat featuring less feathering.

In addition to their role as pets, show and field dogs, Irish setters, with their affectionate personality, are also used as therapy dogs in schools and hospitals.

Irish setters have an average lifespan of 11 to 14 years, and suffer from several diseases and health complications that can reduce their quality of life. Some of those things include gastric torsion, which tends to effect deep-chested dogs, epilepsy, hip dysplasia and cancers, as well as eye, thyroid and blood disorders.

At Paw Print Genetics, we offer an Irish setter panel test that screens for six known mutations in the breed. Those include the neurologic disorder degenerative myelopathy; a cell issue called globoid cell leukodystrophy (Group A), which effects muscle movement and coordination; an the inherited immunodeficiency disorder known as leukocyte adhesion deficiency, type I; the metabolic issue known as neuronal ceroid lipofuscinosis 8; the eye condition of progressive retinal atrophy (Group B); and dilute (D-locus) coat color testing.

In celebration of the Irish setter, Paw Print Genetics is offering 15-percent off the cost of the six-disease panel test through Nov. 17, 2013. Simply enter the code “FBIST” at checkout to receive your discount!

Are you helping your dog stay on Santa's good dog list?