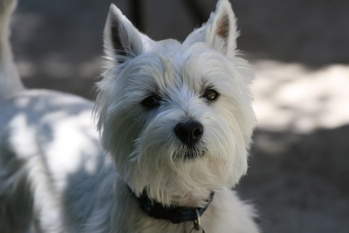 Cases like Rigel and Trudy’s raise an important question; how often are similarly "invisible" biochemical disorders occurring in dogs and going unrecognized and undiagnosed? Human and canine genetic research discoveries have illustrated repeatedly that inherited diseases of dogs parallel the diseases of humans and vice versa.  Given that as a group, inborn errors of metabolism are relatively common in humans and rarely diagnosed in dogs, one must assume that, in dogs, these conditions are being grossly under-diagnosed.  The reality may be that many dogs with such disorders are failing to thrive and quietly dying without breeders and breed lovers realizing that a genetic disease is at fault.  In addition, they are likely unaware that a gene causing such a disease is present in a portion of their dogs and potentially a portion of the dogs within the breed as a whole. Therefore, it is important to be aware of this group of disorders and their clinical presentation so that veterinarians, owners and breeders can do their part to ensure identification and accurate diagnosis of affected dogs.

Many people would rather not know about genetic diseases and would prefer to stick their head in the sand pretending they do not exist and hoping they will go away.  Unfortunately, this is not realistic or proactive for the health of our dogs. Through the use of modern medicine and genetic technologies, identification of hereditary diseases has become commonplace.  Genetic testing can now be done to assist in limiting or eliminating genetic disorders by giving breeders information to avoid the production of affected individuals through informed breeding practices.

There are several major categories or classifications of inborn errors of metabolism, most of these metabolic disorders are a result of toxic cellular accumulation of particular substances such as proteins, carbohydrates or fats. The accumulation of these substances occurs when defects in (or the absence of) specific proteins, known as enzymes, create an inability to carry out the biochemical reactions required for life.  Metabolism refers to the chemical reactions going on in the body to convert, use or produce multiple cellular functions.  In general, metabolism includes processes responsible for breaking down food sources to convert them into energy and other processes allowing for the break down and elimination of cellular “waste”.   In addition, metabolism includes biochemical reactions responsible for changing one substance to another and the cellular transport of all of these products to locations within the cell, out of the cell, and to other cells of the body.  Errors in any one protein or enzyme important in a single stage of these complex and multicellular processes can result in serious pathological consequences for affected individuals.

Severe presentation of a metabolic disorder in a neonatal puppy may be failure to thrive (manifested in many ways including poor appetite and failure to grow), brain malfunction, liver failure, shock, coma and death.  None of these may be recognized as such in a young puppy and just attributed to "puppy mortality”.  Unless special studies, such as genetic testing or specific pathology tests are ordered, the underlying cause of such puppies' issues is unlikely to be identified.

These disorders can present in many varied and largely "invisible" ways.  They are not like a dysplastic hip or isolated cataract of the eye where one can identify a physical defect that is clearly related to the issues the dog is experiencing.  Dogs with metabolic disorders will often present with general symptoms like weakness, poor growth, loss of weight, poor appetite, seizures, vomiting, skin problems, susceptibility to infection, hair loss, and various eye abnormalities such as clouding of the corneas.  If a dog presents with vague signs such as lethargy, vomiting and not eating well it is not likely to raise a red flag or create a concern that the dog has a genetic disease and is often unlikely to be diagnosed.  If the problem is chronic or progressive, owners may want to discuss a referral to the closest veterinary university to have their dog evaluated for a possible metabolic disorder.  Biochemical testing can be collected and submitted in consultation with PennGen - Section of Medical Genetics, School of Veterinary Medicine, University of Pennsylvania.

Diagnostic testing by DNA analysis can also be sent to Paw Print Genetics where testing can be performed based on the dogs symptoms, possible diagnosis, and potentially, breed.   Genetic counseling is provided at Paw Print Genetics so that you can learn more about the inborn errors of metabolism and the possible risks for such a disorder in your dog based on their breed and clinical presentation.

I perform genetic testing for CNM on my Labradors, but what is CNM?

Invisible Disease, What's wrong with my dog?, eCanine Genetic Disease, enzyme, my dog is very sick, no one can figure out my dog