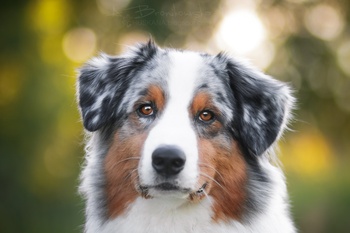 While advancements in science, medicine, and agriculture have played a role in decreasing the relative importance of the dog in human survival, their importance as pets, companions, and surrogate family members may be greater than ever. Once more commonly selected for their athletic prowess and behavioral traits, the rise of dog fancying over the past 250 years has elevated the importance of canine aesthetics to previously unprecedented heights. As a result, dog breeders have historically gone to great lengths to produce dogs with unique phenotypic characteristics desirable to potential pet buyers. While most of these characteristics are simple, mendelian genetic traits without health concerns, some desirable and interesting traits such as the merle coat color pattern are unique to domestic animals and bring with them a complexity and potential health concerns that veterinarians should be aware of in their goal of facilitating canine health and wellbeing.

In 2006, Dr. Leigh Anne Clark and others identified a semi-dominant genetic mutation responsible for the merle coat color pattern commonly seen in numerous dog breeds including the Australian shepherd, collie, border collie, and dachshund. Merle coat color is marked by areas of normal, eumelanistic pigmentation separated by areas of diluted pigmentation. Unlike the many known simple, mendelian phenotypic traits of dogs, merle dogs are the result of a SINE element in the canine PMEL gene containing a polyadenine (poly[A]) tail of variable length resulting in phenotypic heterogeneity as reported by two independent groups in 2018 (Murphy et al. and Ballif et al.).

A continuum of poly(A) tail lengths from dog to dog results in a spectrum of colors and patterns which have been grouped into at least 4 phenotypic merle groups controlled by the relative length of the individual’s poly(A) tail. From shortest to longest, the phenotypic groups proposed by Ballif and others were “cryptic”, “atypical”, “classic”, and “harlequin”.

Though these general phenotypic groups associated with poly(A) tail length apply to the majority of merle dogs, multiple examples of exceptions to these groups have been reported, indicating that other factors also contribute to the merle phenotype of an individual.

Repetitive DNA sequences and poly(A) tracts such as the one on the merle-associated insertion are known to be prone to error during replication due to an inherent inability of the enzyme, DNA polymerase to accurately replicate the template DNA strand. The resulting strand slippage and mispairing of nucleotides can result in either contraction or expansion of the original sequence. While most contractions or expansions tend to change the tail length by only a few bases, in some cases, large contractions or expansions occur.

Errors occurring in somatic cells during cell divisions related to development result in variability in the length of the poly(A) tail from cell to cell of an individual. The genetic changes related to this phenomenon, known as somatic mosaicism, cannot be inherited by the individual’s offspring and are likely responsible for the randomness of the merle pattern. Murphy et al. speculated that variability in poly(A) tail length from cell to cell may underlie the merle phenotype due to the variable impact on pigmentation. Errors occurring in the germ cells of merle dogs during gametogenesis result in ova and sperm with variable poly(A) tail lengths; a phenomenon known as germline mosaicism. Genetic changes occurring in the PMEL gene during gametogenesis in merle dogs are passed on to offspring during reproduction.

The beauty and unpredictability of the merle coat pattern has shown to be highly desirable to dog lovers and fanciers alike. However, this beauty comes with great breeder responsibility due to the nature of the way merle is inherited and related health concerns. Since merle is a semi-dominant trait, dogs must only inherit one copy of the merle insertion (from a single parent) to display a traditional merle coat. However, dogs homozygous for the merle insertion are at risk of being born with an extreme white phenotype with limited areas of pigmentation which is often diluted. These “double merle” dogs are also at risk for auditory and ophthalmologic aberrations including deafness, microopthalmia, and colobomas as well as variety of other abnormalities. Interestingly, homozygous merle dogs which inherit insertions with poly(A) tail lengths in the small, “cryptic” range are less likely to display disease phenotypes despite technically being “double merle”. Some blood lines regularly produce homozygous mutants with one copy of the cryptic merle insertion and one copy of the classic merle insertion without producing diseased dogs. However, the rare and unpredictable chance of large expansions in the poly(A) tail in gametes of cryptic merle dogs make recommendations to routinely breed cryptic merle to classic merle dogs difficult to make. Offspring inheriting an expanded allele from the cryptic merle parent (expanding back to a classic merle size) and a classic merle allele from the merle parent will be at very high risk of the extreme white and disease phenotypes. It is for this reason that Paw Print Genetics recommends that all dogs which are expected to be bred to a merle dog, undergo genetic testing at the M (merle) Locus for the merle insertion. If the non-merle dog is found to have the insertion (regardless of length), the safest and most predictable approach to avoid producing merle-related disease would be to find a different, non-merle mate which has not inherited the mutation.

Though it is commonly recognized that dogs homozygous for the merle insertion are at high risk of pathology, in at least one study, heterozygous merle dogs were also reported to be at a significantly increased risk of unilateral or bilateral deafness compared to dogs without the mutation. Another study also found a significant correlation between deafness and the merle phenotype without consideration to genotype. In addition, merle puppies with two blue eyes (a common finding in merle dogs) and merle puppies with an excessive amount of white on the head were also significantly more likely to display deafness. However, since genotypes were not obtained in this study, it is possible that some of the deaf dogs in this study were actually homozygous for the merle-associated insertion (of variable lengths), thus placing them at an increased risk for hearing problems despite not displaying the extreme white “double merle” appearance.

Genetic testing of the M-Locus in dogs from merle lines with unusual coat colors or suspected ocular or auditory deficits may help uncover the likely underlying genetic factors responsible for such findings. Results of M-Locus testing include a quantitative assessment of the merle-associated insertion length and an interpretation related to the length of the insertion in the individual. With a little understanding of the characteristics of the merle mutation, how it is inherited, and the phenotypic ramifications of this mutation, veterinarians are better armed to assist their breeding clientele in the avoidance of unnecessary suffering and disease related to this beautiful coat color. If you have questions or concerns about merle phenotypes or genotypes, or about breeding merle dogs, please feel free to contact Paw Print Genetics at AskUs@pawprintgenetics.com or call our knowledgeable geneticists or veterinarians during normal business hours (Monday to Friday, 8 am to 5 pm Pacific time) at 509-483-5950.

Happy New Year, from the CEO of Paw Print Genetics

The Complexities of Genetic Testing and Counseling: Accuracy, Penetrance and Validity, Oh My!