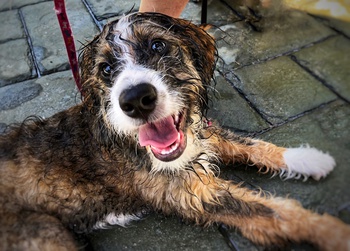 The impact of canine genetic testing on veterinary medicine continues to grow as dog owners become increasingly interested in the genetic factors underlying their dogs’ health and how knowledge of these factors may improve the lives of their furry companions. Genetic screening tools which test for large numbers of deleterious genetic mutations, such as the Canine HealthCheck (CHC) developed by Paw Print Genetics (PPG), are particularly useful when performed on a young dog to identify specific inherited health concerns; especially in cases where the lineage of the dog is unknown.

Among the tests performed on the CHC are disease tests which may prove invaluable in decreasing client costs associated with diagnosis, increasing speed of diagnosis, or improving medical outcomes. For example, many tests included on the CHC, such as the test for the neurological disease, degenerative myelopathy (DM) are adult-onset conditions which may not be observed in a dog until it has reached late adulthood. DM is a progressive disease caused by a genetic mutation in the canine SOD1 gene which can only be definitively diagnosed after death through histologic examination of the spinal cord because antemortem diagnostic methods fail to yield pathognomonic results. In addition, other common diseases in older dogs including intervertebral disc disease or osteoarthritis can mimic signs of DM, sometimes making diagnosis challenging. Therefore, the strongest pieces of evidence to diagnose DM prior to death are the classic clinical signs of a DM combined with genetic test results showing that the dog has inherited two copies of the SOD1 gene mutation. Owners that have previously found their dog to be at risk for DM through genetic testing can save considerable amounts of time and money attempting to obtain a diagnosis when clinical signs of DM become apparent.

In addition to diseases that are difficult to diagnose or that display a late onset, some diseases require immediate treatment to prevent or reduce the clinical signs associated with disease. One example on the CHC is the disease known as intestinal cobalamin malabsorption, in which dogs are born with a decreased ability to absorb the vitamin cobalamin (vitamin B-12). If left untreated, dogs with cobalamin deficiency can display a host of clinical signs including anemia, poor weight gain, metabolic derangements, severe neurological disease and death. In most cases, dogs do not show signs of cobalamin deficiency until at least 3 to 4 months of age when fetal stores of cobalamin wane. However, dogs diagnosed at a young age through routine genetic screening can begin cobalamin supplementation immediately to prevent the severe consequences associated with this deficiency. Dogs which begin lifelong parenteral supplementation early (especially before clinical signs) have a very high likelihood of living a normal lifespan with minimal to no long-term health consequences associated with cobalamin deficiency, such as permanent brain damage.

Some diseases such as those involved in blood clotting or drug metabolism are particularly concerning in the veterinary hospital where surgery on affected dogs or treatments with specific drugs may prove disastrous. In addition to five tests associated with different types of von Willebrand Disease (vWD) in dogs, the CHC also includes testing for 12 other inherited clotting disorders which allow for a veterinarian to properly prepare for excessive bleeding risk prior to the first incision and greatly reduce the risks associated with surgery on such a patient.

Similarly, dogs with the disorder known as multidrug resistance 1 (MDR1), caused by a mutation in the canine ABCB1 gene, are at a VERY high risk of developing severe neurological adverse drug reactions when administered specific drugs known to be transported out of the central nervous system by P-glycoprotein. Though it is commonly discussed that drugs in the avermectin class are a particular concern, drugs from other classes, including the commonly used pre-anesthetic agents, butorphanol and acepromazine, certain chemotherapeutic agents, and some drugs used for GI disease (loperamide and apomorphine) are also transported by the P-glycoprotein. Most cases of MDR1-associated adverse drug reactions occur in dogs which have inherited two copies of the associated mutation because these dogs have no P-glycoprotein activity. However, sometimes dogs with only a single copy of the ABCB1 gene mutation can also display adverse drug reactions despite having partial P-glycoprotein function. Therefore, knowing from a young age that a dog carries this mutation can prevent serious consequences related to drug administration and allow for safer medications to be used, when possible.

Paw Print Genetics (PPG) changed the canine genetic testing paradigm when it opened for business in 2012. Not only did PPG bring the most canine genetic health tests under one roof for the largest number of dog breeds, but also implemented a level of laboratory quality that was rarely seen in clinical veterinary genetics laboratories previously (even publishing the first ever standards and guidelines for canine clinical genetic testing laboratories). However, since most genetic diseases had only been described in specific breeds, it was quickly realized that no genetic health testing was available for mixed breed dogs of unknown ancestry (which make up the majority of domestic dogs) or rare breeds for which no genetic mutations had been documented. As a result of this concern and the powerful potential benefits of inherited disease testing, the Canine Healthcheck was developed to allow for testing of any dog, regardless of their breed ancestry.

Samples that are submitted for diagnostic testing through PPG are tested for individual breed-specific tests or breed-specific disease panels that are chosen by the person placing the order. In addition, by default, samples submitted for testing through PPG are evaluated using two independent methods of testing that have each been validated to greater than 99% accuracy. Results of this testing are only reported if the results match on both independent methods. By combining these two independent results, PPG can attain nearly 100% accuracy and should be considered the ideal testing for breeding dogs.

While the CHC is a powerful screening tool for dogs that has been validated to 99% accuracy, it is important to note a small trade-off associated with the ability to test for such a large number of mutations from a single DNA sample. In contrast to PPG testing which includes two independent methods of testing for each disease test ordered, samples tested for CHC testing are assessed with only a single testing method (like almost every other canine genetic testing laboratory) and therefore, have a very slight increase in the potential for false results (less than 1% increase) compared to PPG diagnostic testing. For this reason, if there is a result found to be concerning to the owner, they can have a follow up, diagnostic test performed through PPG to confirm the finding.

Canine HealthCheck- The Latest and Greatest from Paw Print Genetics

In November 2019, Paw Print Genetics released the newest and the most comprehensive version of the Canine HealthCheck to date. The new CHC includes over 250 tests for inherited diseases and traits allowing for early diagnosis and treatment, preparation for future health concerns, and safer or better outcomes from medical or surgical treatment. If you have questions regarding the Canine HealthCheck or any of the individual tests offered by Paw Print Genetics, please feel free to contact our knowledgeable staff at AskUs@pawprintgenetics.com or give us a call (509-483-5950) during regular business hours (Monday to Friday; 8 am to 5 pm Pacific time) to speak with one of our geneticists or veterinarians!