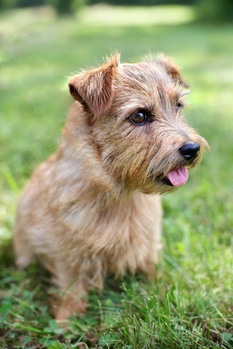 There are few dog breeds that can match the spirit and spunk of the Norfolk terrier. Prior to the recognition of the Norfolk terrier as its own independent breed, this small, English bred working terrier fell under the Norwich terrier banner, in which either drop or prick ears were recognized as acceptable traits. With time, Norwich breeders began to differentiate dogs based upon ear carriage. The drop eared members of the breed eventually became known as the Norfolk terrier, thereby splitting the breed into two very similar, yet distinct lines. The Norfolk terrier was officially recognized by the English Kennel Club in 1964 and by the American Kennel Club in 1979. Two independent breed standards were established for these breeds and despite their common roots, the breeds have diverged slightly in their physical appearance over the past few decades. The Norfolk terrier is well known for their energy, loyalty, bravery, and affectionate demeanor. Breeders of the Norfolk terrier take pride in producing dogs with great temperament while maintaining the breed’s ability to work. That being said, today’s Norfolk terrier is more commonly found in homes as a companion animal rather than fulfilling its original purpose of hunting rodents and other vermin.

Despite the efforts and hard work Norfolk breeders have put forth to perfect their breed, like other pure breeds, the Norfolk terrier has developed some inherited disease concerns that can occasionally be a factor for some blood lines. Historically, some canine inherited diseases have been challenging to eliminate from a kennel due to the presence of non-symptomatic carriers which do not show clinical signs of disease themselves, but can produce affected puppies if bred with another carrier of the same genetic mutation. Discovery of specific genetic mutations associated with disease allows for the development of genetic tests that can allow breeders to make informed decisions about which dams and sires to pair together for their future litters. One inherited disease of the Norfolk terrier that can now be prevented using genetic testing is a skin disease commonly known to breeders as ichthyosis or to veterinarians as epidermolytic hyperkeratosis (EH).

EH is an inherited skin disease known to affect Norfolk terriers which is caused by a genetic mutation in the canine KRT10 gene. Affected dogs are commonly identified shortly after birth with skin that is easily blistered or damaged and which sloughs easily with only mild trauma such as that induced by drying the puppies after birth. Skin fragility is maintained into adulthood and dogs develop dark grey excessive pigmentation of the skin (hyperpigmentation) and significant skin flaking, particularly in areas in which two skin surfaces rub together (armpits and groin). There is no cure for this disease and lifelong therapy using oral and topical medications as well as medicated bathing is necessary to help remove excessive skin flaking and to treat secondary skin infections, should they develop. Given that there is no cure for this disease, prevention through genetic testing of dams and sires is essential.

How is EH Inherited?

EH is inherited in a recessive fashion meaning that dogs must inherit two copies of the KRT10 gene mutation (one from each parent) in order to develop disease. Dogs inheriting one copy of the mutation from a single parent are considered carriers of EH and do not show clinical signs of the disease themselves. However, carriers can produce affected puppies if bred with another carrier of the same mutation. In order to prevent producing affected puppies, carriers should only be bred to dogs that have not inherited a copy of the KRT10 mutation. As with most inherited diseases, it is not recommended to breed affected dogs.

Paw Print Genetics offers testing for epidermolytic hyperkeratosis and two other inherited diseases of concern in the Norfolk terrier. If you have questions about how to most effectively eliminate this disease from your kennel or have general canine genetics questions, please feel free to contact us at AskUs@pawprintgenetics.com or call our laboratory to speak with one of our knowledgeable geneticists or veterinarians at 509-483-5950 (8 am to 5pm; Mon. – Fri.).

Prevention Is Smart Breeding- Ataxia and the American Staffordshire Terrier