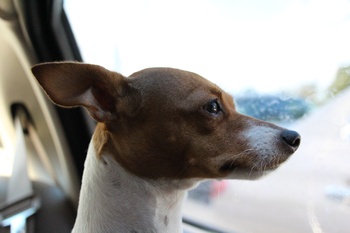 With a personality much bigger than their diminutive size, the toy fox terrier (TFT) is a fun and feisty breed well known for their charming and entertaining personalities. Originally created by the breeding of various toy breeds to the smooth fox terrier, like other terriers, TFTs still love the thrill of the hunt and are at their happiest giving chase to any small mammal willing to run. Though toy fox terriers have occasionally been described as headstrong and have been known to take control of a house, a well socialized and well trained toy fox terrier is a wonderful addition to many families. Still retaining tenacity from their terrier roots, their disposition is also tailored by the variety of toy breeds used to make this fine breed. Unfortunately, like other purebred dogs, the TFT has developed some inherited disease concerns along their path to the modern breed. Luckily, some of these diseases can now be prevented by performing genetic testing on dams and sires prior to breeding and by implementing selective breeding strategies based upon these results. One such genetic condition known to occur in TFTs is congenital hypothyroidism with goiter (CHG), a disease caused by a genetic mutation in the canine TPO gene.

Most cases of hypothyroidism (low thyroid hormone levels) in dogs occur secondary to an acquired autoimmune condition in which the body produces antibodies against the thyroid protein, thyroglobulin. These dogs most commonly present in middle age with uncontrolled obesity, lethargy, heat seeking behavior, and clinical signs of neurological disease. A small number of canine hypothyroid cases, like some cases seen in the TFT, are congenital (present at birth) and are caused by a genetic mutation inherited from their parents. TFTs affected with CHG lack a protein which is crucial for the production of thyroid hormone. These dogs are often recognized before 2 months of age with decreased activity and body size when compared to littermates. Affected dogs will also display signs of dwarfism including short legs and a large head. In addition, affected dogs typically have a fluffy hair coat absent of guard hairs. The characteristic goiter (enlargement of the thyroid gland) of CHG affected dogs can be seen and felt in the neck region from a young age. Affected dogs will also often display a variety of neurological and neuromuscular abnormalities due to low thyroid hormone levels and secondary developmental derangements. If left untreated, dogs with CHG typically die at a very early age due to complications of the condition. However, if a diagnosis is made early, thyroid hormone supplementation allows for nearly normal growth and development and the reversal of hair coat and activity level abnormalities. Despite early intervention with thyroid hormone supplementation, goiters of dogs affected with CHG will continue to grow, and in some cases, will enlarge to the point of causing difficulties with eating and/or breathing.

How is CHG Inherited?

CHG is inherited in a recessive fashion meaning that dogs must inherit two copies of the TPO gene mutation (one from each parent) in order to develop disease. Dogs inheriting a single copy of the mutation will not develop clinical signs of disease and are considered carriers of CHG. However, carriers of CHG can produce affected puppies when bred to another carrier of the same genetic mutation. In order to prevent producing affected puppies, carriers should be bred to dogs that have not inherited a copy of the TPO gene mutation. As with most inherited diseases, it is not recommended to breed CHG-affected dogs.

Paw Print Genetics offers testing for congenital hypothyroidism with goiter as well as testing for three other genetic diseases of concern for the toy fox terrier. If you have questions about how to eliminate congenital hypothyroidism with goiter from your kennel or have any other canine genetics questions, please contact Paw Print Genetics at AskUs@pawprintgenetics.com or give us a call at the Paw Print Genetics laboratory (509-483-5950) where one of our helpful and knowledgeable staff members will be happy to assist you (8 am – 5 pm, Pacific time).