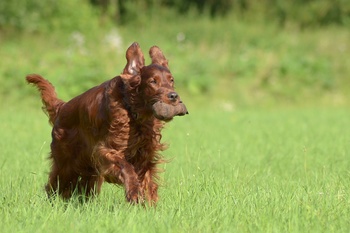 Despite its once prominent role as a talented upland gamebird hunting dog, by the mid-1900s the Irish Setter’s popularity in the field was on the decline. Despite developing significant interest and success as a show dog, the breed had nearly disappeared from the hip of gamebird hunters. Around this time, outbreedings to field champion English setters were performed in an effort to resurrect the popularity and improve the talents of the Irish setter as a hunting companion. In many locales, this field bred variety of Irish setter became known as the red setter while the Irish setter name is now most closely associated with the show variety of the breed. In the United States however, red setters still fall under the umbrella of the Irish setter name. Found in multiple colors and coat patterns in its early history, the breed’s modern solid red coat color became entrenched in the breed due to its popularity in the European show ring of the late 1800s.

Like other purebred dogs, the Irish setter has developed some inherited disease concerns along its path to its modern state. However, through the use of modern genetic testing technology and selective breeding practices, some inherited diseases can now be prevented. A genetic mutation in the PDE6B gene, unique to the Irish setter, is responsible for causing an inherited eye disease known as progressive retinal atrophy, rod-cone dysplasia 1. For the sake of ease, this disease is listed as “progressive retinal atrophy (Irish setter type)” in the Paw Print Genetics genetic testing catalog.

What Is Progressive Retinal Atrophy?

How is Progressive Retinal Atrophy Inherited?

Progressive retinal atrophy, rod-cone dysplasia 1 is inherited in a recessive fashion, meaning that a dog must inherit two copies of the associated PDE6B gene mutation (one from each parent) in order to develop disease. Dogs inheriting a single copy of this mutation are considered carriers of the disease and do not show clinical signs of the disease themselves. However, carriers are at risk of producing affected puppies when bred with another carrier of the same genetic mutation. In order to prevent producing affected puppies, carrier dogs should only be bred to dogs that have not inherited the PDE6B gene mutation. As with most inherited diseases, it is not recommended to breed affected dogs.

Paw Print Genetics offers testing for progressive retinal atrophy, rod-cone dysplasia 1 (Irish setter type) and four other inherited diseases of concern in the Irish setter. If you have questions about how to eliminate progressive retinal atrophy in your kennel or have general canine genetics questions, please feel free to contact us at AskUs@pawrintgenetics.com or speak to one of the knowledgeable Paw Print Genetics veterinarians or geneticists at 509-483-5950.

Preventing Congenital Hypothyroidism with Goiter in the Toy Fox Terrier