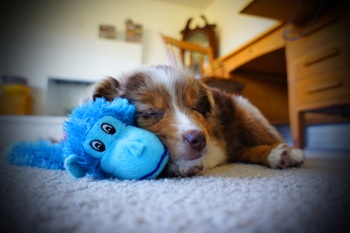 Despite a name which implies an origin “down under”, the Australian shepherd is widely understood to be a breed of American origin. In fact, descriptions of the breed and their importance in the lives of 19th and 20th century Basque shepherds who had relocated from Australia to the western US are plentiful. Australian shepherds’ exceptional intelligence, versatility, desire to please, and a natural instinct to herd and guard livestock have made them a common inhabitant of ranches and farms where they have been trained to perform a variety of tasks. Aside from their work on the homestead, their unique abilities have also made them great competitors in stock dog trials, agility events, and other dog sports. Despite their many talents and desirable traits, like many other breeds, the Australian shepherd has developed some inherited disease concerns that can prevent them from performing at their best or otherwise decrease their overall quality of life. One such condition recognized in the Australian shepherd is the genetic eye disease known as collie eye anomaly.

Collie eye anomaly (CEA), also known as choroidal hypoplasia, is an inherited eye disease caused by a mutation in the canine NHEJ1 gene. Dogs affected with CEA have developmental defects of the choroid, a thin vascular layer of the eye that supplies nutrients and blood to several parts of the eye including the retina and iris. Affected dogs display variable clinical severity from mild choroid thinning without vision deficits to malformation of the optic nerve (coloboma), retinal detachment, intraocular hemorrhage, and blindness. The severity of clinical signs associated with CEA cannot be predicted between generations because mildly affected parents may produce severely affected offspring (and vice versa).

How is CEA Inherited?

Collie eye anomaly is inherited in a recessive manner meaning that dogs must inherit two copies of the associated NHEJ1 gene mutation (one from each parent) in order to develop the disease. Dogs which have inherited a single copy of the mutation are considered carriers of CEA and will not develop the disease themselves. However, carriers are at risk of producing CEA affected offspring if bred with another carrier of the same mutation. Since mildly affected dogs can give birth to severely affected puppies, it is not recommended to breed affected dogs, regardless of their disease severity. It should be noted that some CEA affected dogs display a phenomenon often referred to by breeders as “going normal”. Dogs that have “gone normal” display obvious abnormalities of the choroid and retina on eye exam which appear to resolve at about 12 weeks of age. Though their eyes remain abnormal at the microscopic level, these dogs often do not display vision deficits. Despite their normal appearance after 12 weeks of age, dogs which have “gone normal” should be considered affected when it comes to breeding practices.

Paw Print Genetics offers genetic testing for collie eye anomaly as well as 9 other inherited diseases of concern in the Australian shepherd. If you have questions about how to eliminate collie eye anomaly from your kennel or have other general canine genetics questions. Please feel free to contact the Paw Print Genetics laboratory at AskUs@pawprintgenetics.com or call 509-483-5950 to speak in person with one of our customer-focused, knowledgeable staff members (Mon.- Fri.; 8 am to 5 pm Pacific).

Preventing Congenital Hypothyroidism with Goiter in the Toy Fox Terrier