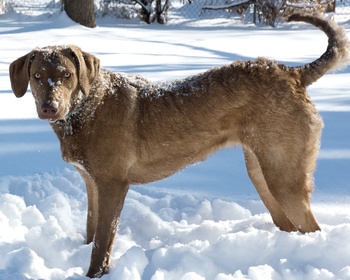 Like other popular retrieving breeds such as the Labrador, golden, and flat coated retrievers, the American bred, Chesapeake Bay retriever can trace its roots back to the St. John’s water dog, a purpose bred dog originating in the Canadian providence of Newfoundland. With its wavy and slightly oily, waterproof coat, the Chessie has become a prominent fixture at the side of bird hunting enthusiasts since its development in the 19th century. Not surprising to those that have lived and worked with a great Chesapeake, the breed has increased in popularity in the US over the past several years as indicated by their jump in the AKC registration rankings from 49th in 2009 to 40th in 2014. Unfortunately, like other pure bred dogs, along its path to modern popularity the Chesapeake has developed some inherited genetic disease concerns that are known to cause medical issues for some dogs and can be a source of heartache for those that love them. One particularly severe, inherited condition unique to the Chesapeake Bay retriever, is a condition known as ectodermal dysplasia or skin fragility syndrome (ED/SFS).

ED/SFS is a severe, inherited disease in which affected dogs are born with a shortened, dysfunctional form of a protein important in linking adjacent skin cells together. This abnormal protein results in unusually fragile skin that is easily damaged during normal activity. Most affected dogs are recognized shortly after birth with pale, translucent skin on their ears, feet, nose and mouth. This skin is particularly prone to sloughing and is often damaged when puppies are dried after birth or licked by their mother. Skin sloughing is common on the ears, footpads, and sites of friction such as the groin or armpit regions. Junctions of skin and mucous membranes, such as those around the mouth, nose, and eyes, are also particularly prone to sloughing. Affected dogs are particularly susceptible to bleeding and significant pain from these skin lesions and are also susceptible to developing secondary skin infections. Affected dogs which survive past the neonatal period may have irregularly thickened footpads and small, malformed toenails. By 3 months of age, these dogs are often smaller than normal littermates and have a relatively sparse hair coat. Sadly, most affected dogs die in the neonatal period or are humanely euthanized due to quality of life concerns. However, the use of genetic testing technologies and informed, selective breeding practices are forging a happier future for the breed by helping breeders eliminate this painful, devastating disease from their Chesapeake blood lines.

ED/SFS is inherited in a recessive fashion meaning that dogs must inherit two copies of the associated PKP1 gene mutation (one from each parent) in order to develop disease. Dogs inheriting only a single copy of the mutation are considered carriers of the disease and do not show clinical signs of the disease themselves. However, ED/SFS carriers can produce affected dogs if bred with other carriers of the same mutation. In order to prevent producing ED/SFS affected puppies, carriers of this PKP1 gene mutation should only be bred to dogs that have inherited two normal copies of this gene.

Paw Print Genetics tests for ectodermal dysplasia/skin fragility syndrome and 3 other genetic diseases reported to affect the Chesapeake Bay retriever. If you have questions about how to eliminate these inherited diseases of Chesapeakes from your kennel or have general canine genetic diseases questions, please feel free to contact the knowledgeable, Paw Print Genetics staff at AskUs@pawprintgenetics.com or give the laboratory a call at 509-483-5950 (Mon.-Fri.; 8 am to 5 pm Pacific).