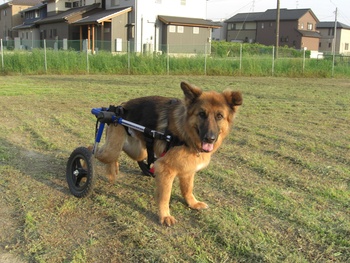 If there is anything that I have learned in Paw Print Genetics’ quest to prevent canine inherited diseases, it is that degenerative myelopathy (DM) is one of the most misunderstood diseases in the dog breeding community. This late-onset, progressive neurological disease is notorious for cutting affected dog’s lives short and preventing them from living out their golden years. Unfortunately, sometimes there are misunderstandings in regard to what causes DM, what DM genetic test results mean, and whether or not DM occurs in certain breeds or bloodlines. I will attempt to address the confusing aspects of DM in order to empower people to eliminate this devastating disease from their blood lines.

How Do DM Affected Dogs Present? How is it Inherited?

Dogs affected with DM typically begin showing signs of painless, hind limb weakness and loss of balance around 7 to 10 years of age. These dogs often have difficulty rising after lying down, will drag their hind feet while walking, and abnormally cross their legs while standing. As the disease progresses, affected dogs’ front limbs also become progressively weaker until the dog becomes unable to walk. Affected dogs also may develop urinary and fecal incontinence as the disease progresses. Most dogs are euthanized within 6 months to 2 years of the initial clinical signs due to poor quality of life.

Though it is no longer the only known mutation responsible for causing DM in the dog, the vast majority of DM cases are caused by a particular reported mutation in the canine SOD1 gene (another mutation, discussed below, has been identified to cause DM in the Bernese mountain dog). Though only described in 5 dog breeds in the initial publication, the same mutation has since been identified in over 100 different breeds. DM caused by this mutation is inherited in a recessive fashion with incomplete penetrance meaning that a dog must inherit two copies of the mutation (one from each parent) in order to develop DM. However, not all dogs that inherit two copies of the mutation will become affected. Dogs inheriting a single copy are considered carriers of DM and will not typically show signs of the disease, but can have affected puppies if bred with another carrier of the same mutation.

Breed or Bloodline Susceptibility to DM

Out of all of the misconceptions I have heard regarding DM, the most common one is that DM does not occur in a particular breed or bloodline despite the presence of the common SOD1 mutation in the breed. It is true that some dogs do not ever develop DM even when inheriting two copies of the mutation. This indicates to us that in some dogs, other genetic or environmental factors may play a role in producing a protective effect or slowing the progression of disease such that the disease does not clinically manifest during the dog’s lifetime. However, the factors producing a protective effect are not known and therefore cannot be manipulated to prevent disease in future litters. Since dogs inheriting two copies of the disease can have clinically affected puppies even if they never show signs of the disease themselves, the only predictable way to prevent DM caused by the most common mutation is to genetically test breeding dogs and to selectively breed carriers to dogs that did not inherit the same mutation.

In addition to the issues related to incomplete penetrance of DM, my experiences in clinical veterinary practice made it apparent to me that people may not be aware of DM issues in their line. It was my experience that most owners of DM affected dogs never considered the fact that their dog may be suffering from an inherited issue. Instead, the signs of DM were often written off as arthritis, hip dysplasia, or simply “slowing down” due to age. Without an accurate diagnosis or veterinary discussion of genetics, few owners would feel compelled to contact the breeder of their dog, given that they still knew how to contact them after the 7 to 10 years it normally takes for affected dogs to begin showing clinical signs. Without this vital information from owners, breeders could easily be in the dark when it comes to this condition in their line.

Another misconception about testing for DM is that people think that the current genetic testing available for the disease is not useful. While there are probably many reasons why this misconception exists, in addition to the issues related to incomplete penetrance, there are other complexities of DM that likely confuse people.

One troubling finding for some is that a small portion of DM affected dogs will not have the common SOD1 mutation or only possess a single copy of the mutation when tested. The most likely explanation for this phenomenon is that there are other, unknown genetic mutations that are also responsible for causing this disease. If only testing for a single mutation, you may not know what other genetic mutations could be contributing to the condition. While it would likely make sense to most that a dog inheriting two copies of an unknown mutation could cause DM (and not show up on our current DM test) I have found that many people have a difficult time understanding how a dog could inherit a single copy of the common mutation, but still develop the disease. Let’s examine the case of the Bernese mountain dog to help us understand what could potentially be happening in these cases.

In a 2013 case study, a DM affected Bernese mountain dog was described to have inherited a single copy of the most common SOD1 mutation from one parent and a single copy of the Bernese SOD1 mutation from its other parent. Since this dog received a mutated copy of the SOD1 gene from each parent, it did not receive a normal copy of the gene to mask the effects of either mutation as in most recessively inherited conditions. This phenomenon, known as compound heterozygosity is well documented in humans. However, to my knowledge, the 2013 case report is currently the only one of its type in dogs. With discovery of additional disease associated mutations in dogs, it is likely that many similar examples will be found in our canine friends.

Despite the fact that there are likely other unknown mutations responsible for DM in our dogs, the originally described SOD1 mutation is believed to cause the VAST MAJORITY of cases. Given this knowledge, genetic testing and selective breeding could completely eliminate degenerative myelopathy in most blood lines. Thus, justifying the use of the currently available genetic test for DM, despite its limitations.

Paw Print Genetics offers DM testing in over 100 breeds of dog. To see if your dog breed is potentially at risk, click here. If you have questions about how you can prevent this genetic disease in your kennel or have any other general canine genetics questions, please email Paw Print Genetics at AskUs@pawprintgenetics.com or call the Paw Print Genetics laboratory at 509-483-5950.