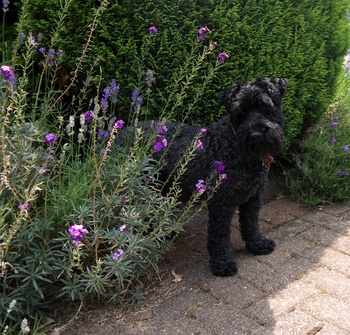 The Irish-bred, Kerry blue terrier (KBT) is historically a well-rounded working dog with its roots in hunting small game and rodents. However, their intelligence and diverse abilities have also led to their success as guard dogs and as a herding breed. Like many terriers, the KBT is known for its high energy and tends to benefit greatly from daily exercise. Though early KBTs were often selected for their tenacity and aggressiveness to perform their duties as hunters and guard dogs, these attributes historically made them less suitable companions for other dogs. However, modern breeding efforts have focused on maintaining their high energy while decreasing tendencies toward aggression.

One of the most striking attributes of the KBT is their characteristic hair coat. Kerry blue terriers are born black, but develop their beautiful, soft and wavy blue/gray coat during the first two years of life in a process of color fading, commonly referred to as “clearing”. Dogs displaying black coloration on the body after 18 months of age are disqualified from the AKC show ring. However, black on the extremities (muzzle, head, ears, tail, and feet) is allowed at any age.

This spirited breed, though relatively healthy, has developed some inherited disease concerns during its path to its modern state. One important disease concern for the KBT (and those that love them) is a blood clotting disorder known as von Willebrand disease type I (vWDI), caused by a mutation in the canine VWF gene.

Dogs affected with vWDI lack adequate amounts of a protein known as von Willebrand factor which plays an important role in the beginning stages of clot formation. Among other functions, von Willebrand factor is responsible for binding platelets to wound sites, thus creating a platelet plug which marks an important landmark in the stoppage of bleeding. Affected dogs have a variable amount of von Willebrand factor and not all dogs are equally affected with disease. Clinical signs associated with vWDI are relatively mild in comparison to other types of the disease. In some cases, dogs may suffer nosebleeds, bruise easily, and may bleed excessively when losing their baby teeth. However, most affected dogs will first be recognized during surgery or after traumatic events due to their excessive bleeding.

Though there is no cure for vWDI, some canine blood products and medications are recognized to ameliorate the clinical signs of excessive bleeding due to the disease. Since blood products are not always readily available in general veterinary practices, diagnosis of vWDI affected dogs prior to surgery allows for necessary precautions to be taken in order to obtain them. However, preventing the disease through genetic testing of dams and sires and informed selective breeding practices are much more desirable and predictable precautions than relying on medication or blood products as a stopgap.

How is vWD I Inherited?

Paw Print Genetics offers testing for vWDI and two other inherited diseases of the Kerry blue terrier. The same VWF gene mutation implicated in KBTs is also responsible for causing vWDI in dozens of other breeds; thus, indicating it is likely an ancient genetic mutation first arising in a common ancestor of these dog breeds. If you have questions about eliminating vWDI from your kennel or have any other canine genetic disease related questions, please contact Paw Print Genetics at AskUs@pawprintgenetics.com or give us a call at 509-483-5950 to speak with our experienced, friendly, and knowledgeable staff.