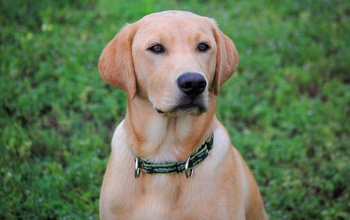 In this fourth and final blog in a series about preventable inherited diseases in the Labrador retriever (see previous blogs here; part one, part two, and part three), we will examine a potentially life-threating urinary disease and a cause of blindness in dozens of dog breeds including the Labrador.

Urinary tract obstruction is one of the most urgent and potentially life-threatening conditions in dogs. One common cause of urinary obstructions in dogs is the presence of bladder stones which leave the bladder during urination and become lodged in the urethra. The inability to urinate results in a toxic buildup of certain electrolytes and waste products in the body including potassium, which tends to be the most concerning in regards to health effects. Excess potassium in the body prevents the heart from beating normally, ultimately resulting in death due to cardiac arrest. Though it is not the only cause of bladder stones in Labradors, a genetic mutation in the SLC3A1 gene is reported to cause an early-onset disease known as cystinuria, which can result in bladder stone formation.

While normal kidneys reabsorb a variety of nutrients and electrolytes from the urine, dogs affected with cystinuria lack the ability to produce a protein which plays an important role in the kidney’s reabsorption of certain amino acids including cystine. Affected dogs will have excess cystine present in the urine which frequently results in the formation of cystine crystals and stones in the urinary tract; particularly in the bladder. In addition, though it is not common for dogs to develop kidney stones, dogs with cystinuria have been reported to develop them in rare cases.

Though there is variability in the age of onset, Labradors affected with cystinuria will often show their first signs of urinary obstruction around 6 to 14 months of age. However, some males and most females will develop problems at a later age. Urinary obstruction due to stones is more common in males than females due to the male dog’s longer and narrower urethra. There is no cure for cystinuria, but affected dogs can be managed with medications and prescription diets formulated to lower protein intake and alkalinize the urine. Even with preventative medicine and diet, dogs affected with cystinuria may still develop urinary obstructions. Though cystine bladder stones can be successfully removed surgically from the bladder and urethra, they are highly likely to recur; especially in dogs that are not being treated preventatively.

Progressive retinal atrophy, progressive rod-cone degeneration (PRA-prcd) is a relatively common eye disease in dogs caused by a mutation in the PRCD gene. Just one of over a dozen known genetic mutations that cause different forms of progressive retinal atrophy, the mutation responsible for causing PRA-prcd has been discovered in many dog breeds, suggesting that the mutation originally occurred in an early common ancestor to our modern day dogs.

As a general group of diseases, progressive retinal atrophy leads to blindness of variable severity and age of onset due to degeneration of the retinal cells known as rods and cones which play an important role in sensing light. The signals produced by these cells travel to the brain through nerves and are interpreted by the brain. Thus, allowing for what we understand as vision.

In PRA-prcd, signs of retinal disease may first be detectible by electroretinogram in affected dogs around 1 ½ years of age. However, most dogs will not show clinical signs of blindness until around 4 to 6 years of age when degeneration of cells becomes more advanced. The first signs of PRA-prcd are typically caused by a degeneration of rod cells in the retina which play an important role in vision under dim light. The loss of these cells lead to signs of “night blindness”. As the disease progresses, cone cells responsible for vision in normal, day light conditions also degenerate, resulting in complete blindness. Most dogs which inherit two copies (see “How Are These Diseases Inherited?” section below) of the PRCD mutation will eventually progress to complete vision loss. There are no commercially available treatments or cures for PRA-prcd. Thus, making prevention through genetic testing and selective breeding the best bet to eliminate the disease from a breed.

Both of the diseases discussed in this blog are inherited in a recessive fashion meaning that a dog must inherit two copies of the associated genetic mutation (one from each parent) in order to develop either disease. Dogs inheriting a single copy of either mutation from one parent are considered carriers. Carrier dogs are not expected to show clinical signs of these diseases, but can produce affected puppies if bred with another carrier of the same mutation.

Exercise-Induced Collapse and Hereditary Nasal Parakeratosis in the Labrador Retriever

Preventable Inherited Diseases of the Old English Sheepdog- Part One