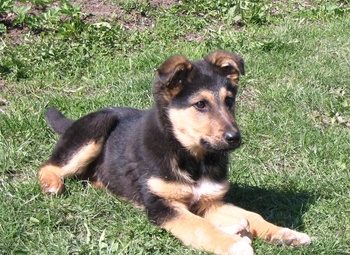 An example of a canine hereditary cancer predisposition syndrome is renal cystadenocarcinoma and nodular dermatofibrosis, which is found in German shepherd dogs. It predisposes the dog to renal (kidney) cancer.  This condition is a combination of abnormal growth in the kidneys and the skin. Affected dogs usually present with firm bumps or lumps under the surface of the skin, more commonly located on the limbs and head. Signs of kidney problems can include increase in water consumption, increased urination, depression and weight loss. Extra fibrous tissue on the kidneys may cause them to become enlarged and abnormally shaped. The kidneys may become so large that the affected dog’s abdomen may become distended. The disease typically presents over the age of five.

This disease is the result of genetic changes that are both germline and somatic.  Genetic testing is only available for the germline mutation which is inherited as an autosomal dominant condition.  Genetic testing of the BHD gene in German shepherd dogs will determine whether a dog carries the mutation and is at risk for renal cystadenocarcinoma and nodular dermatofibrosis. Reliable genetic testing for the germline mutation is important for determining breeding practices, especially in this later-onset disease. Breeding of affected dogs is not recommended, as there is a 50% risk for offspring to inherit the mutation and will be at high risk for renal cell cancer. German shepherd dogs that are not found to have the mutation have no increased risk of having affected pups.

People quite often ask me if a disease/condition is genetic or not.  What they are really asking is if it is inherited or not.  It is important to know what genetic change is inherited, so a testing strategy can be designed.

The Importance of Testing for Adult-Onset Conditions in Your Dog