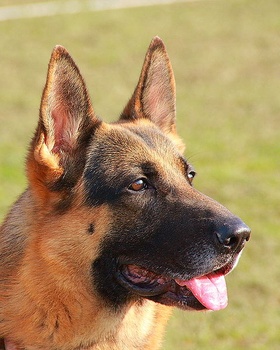 My last blog talked about the basics of two types of inheritance for genetic conditions found in dogs: dominant and recessive.  To review, dominant conditions need one copy of the mutated gene in order for the dog to show symptoms.  Recessive conditions need both copies of the mutated gene inherited from each parent to have the disease.  Knowing the difference can change the way breeders choose which dogs to breed.  However, the wonderful world of genetics is not that simple.  Another pattern of inheritance is called X-linked, or sex-linked.  Although it is not as common as dominant and recessive; it is important to know which diseases follow this inheritance pattern, because it may impact breeding.

The X and Y chromosomes are paired together, even though they are structurally not the same and carry different genes.  If there is a mutation in a gene on the X chromosome, and the dog is female, they usually have no symptoms.  The disease typically behaves like a recessive condition.  Females are carriers, but have another copy of the same gene to do its job.  Another neat fact is the cells of a female do something called X-inactivation.  The cells shut down one of the X chromosomes, so only one out of the pair is turned on.   When there is a mutated gene on the X chromosome, sometimes the cells are inclined towards turning that chromosome off.  In other words, the ratio of turned-off chromosomes is biased towards the X chromosome that has the mutation. This process is also called “lyonization”.   More mutated genes are turned off and more unaffected chromosomes are turned on.  It’s like a chromosomal safety net.  Female carriers have a 50% chance to pass on the mutation.  For the offspring, female carriers will usually have no symptoms, just like their carrier mothers.

Perhaps you are wondering why I stated females usually don’t have symptoms instead of females do not have symptoms.  An exception in X-linked inheritance is female carriers may have mild disease symptoms, when compared to their male counterparts.  Again, this can be explained by lyonization.  If the X-inactivation shuts down more of the X chromosomes without the mutation, then the female is using more copies of the mutated gene to do its job, and the result is mild symptoms.  In this case, the lyonization is skewed in the other direction, toward the unaffected X chromosome.  More mutated genes are turned on and more unaffected chromosomes are turned off.

Males are at a disadvantage when it comes to X-linked conditions.  Both the X and Y chromosomes are active in males. There’s no chromosomal safety net in place to protect the male, as there is in the female with two X chromosomes.   If there is a mutation on the X chromosome of a male, there will be symptoms.  An affected male has a 50% chance to pass on the mutation to the next generation.  All of its female offspring will be carriers, and none of the males will be affected, because the male offspring received the father’s Y chromosome.  X-linked conditions are not passed from male parent to male offspring.  That’s because male pups inherit the Y chromosome, and the mutated gene is on the X chromosome.

For example, Hemophilia A is an X-linked recessive bleeding disorder in humans and dogs and may be found in the German Shepherd and White Shepherd. When it comes to normal blood clotting, there needs to be a happy medium; too much or not enough clotting is not healthy.  Hemophilia causes too much bleeding and not enough clotting.  The affected dog presents with easy and excessive bruising and frequent nosebleeds. Issues may occur after an affected dog is vaccinated as a live vaccine can also affect the normal clotting process. Dogs may show signs of lameness or stiffness if bleeding in the joints is present. There may also be prolonged bleeding after surgery or trauma, and in some cases, the bleeding may be severe enough to cause death. Due to the variable severity of the disorder, affected dogs may not be identified until a surgery, such as spaying, or trauma occurs and excessive bleeding is then noted.  Breeding of dogs (affected males or carrier females) is not recommended.

Inherited heath issues in a dog may lower the quality of life for the dog.  Breeders armed with knowledge of their dogs’ carrier status and an understanding of genetics may have the ability to reduce these diseases in future generations.

Breed of the Week: Brittany