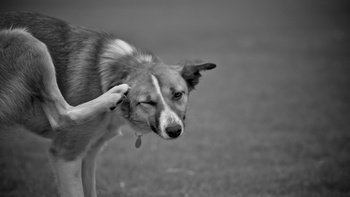 Click here for Part 1 of this ongoing blog about itchy dogs.

Like people, some dogs are known to develop seasonal summer allergies to a variety of environmental allergens. Pollen, mold, dust mites, and mildew are just a few of the triggers that can make dogs itchy as the days become warmer. Many dogs have only mild signs of allergies that can be controlled by the use of antihistamines and bathing to wash allergens from the hair coat. In these mild cases, the allergies are predictable annually, they don’t seem to progress in severity, and are relatively easy to manage. However, for some dogs, the body’s reaction to allergens is so significant that their overall quality of life can be greatly impaired.

Canine Atopic Dermatitis
An allergic disease now termed “canine atopic dermatitis” (CAD) is a relatively common and troubling condition seen in our canine friends. It is estimated that up to 10% of all dogs are affected by this condition worldwide. First discussed in the 1930’s, the definition of the disorder and our scientific understanding of the cause are still being worked out. Our current understanding is that CAD is a multifactorial disease involving genetic predisposition, immune system dysregulation, hypersensitization to environmental allergens, skin barrier abnormalities, bacterial and fungal overgrowth on the skin, and other environmental factors. Though originally thought to be a disease caused by hypersensitivity to inhaled allergens, CAD has since been described in dogs in which food acts as the primary or contributing trigger of the allergic clinical signs.

Diagnosis
Though CAD was originally described over 80 years ago, due to its massive variability in clinical signs and breed-dependent manifestations of disease, a formal set of diagnostic criteria continues to evolve as our understanding of the disease improves. Due to difficulty in accurately diagnosing this disease, it is normally diagnosed after excluding other potential causes of itchiness including simple food allergy and parasite infestations. In general, CAD begins in dogs less than 3 years of age often beginning with seasonal allergies that progress to year-round problems. These dogs tend to show itchiness before skin lesions are seen that consistently respond to glucocorticoid steroid therapy (prednisone falls into this class). Diffuse hair loss and chronic inflammation of the skin on the feet, face, and around the rectum is common. However, some dogs will also suffer from inflammation of skin on the trunk, lumbar region, and around the genitals. The inflamed skin of affected dogs functions as a more suitable home for certain bacteria and yeast species. Thus, it is common for dogs with CAD to develop recurring secondary infections of the skin and ears that complicate treatment and increase itch. In response to chronic inflammation and infection, over time affected dogs will often develop thick, rough, hyperpigmented skin that resembles that of an elephant. Some dogs will have chronically flaky skin while others develop a moist, greasy coat often accompanied by a significant, characteristic odor. Without appropriate therapy, dogs with CAD develop a cycle of itch and scratching behavior that can exacerbate lesions of the skin and make the signs of disease worse.

Treatment
There is no cure for CAD. Therefore, the goal of treatment is to maintain a maximal amount of comfort while limiting side effects from medications. It is important for owners of affected dogs to understand and prepare for a lifelong condition that must be managed consistently to prevent severe flare ups requiring more intensive treatment. Though effective treatment will vary with every dog, symptomatic therapies frequently involve antimicrobial and anti-inflammatory medications (oral and topical), bathing with anti-microbial and anti-inflammatory shampoos, dietary supplementation (fish oils are particularly helpful in some cases), immunotherapy (desensitizing “allergy shots”), and antihistamine therapy. Each therapy is tailored to the individual dog and response to previous therapies.

It is crucial for affected dogs to be maintained on a strict monthly external parasite control regimen for fleas and ticks and have food allergy issues controlled, if they exist. Without controlling other factors contributing to itch, establishing an effective ongoing disease maintenance protocol for the allergies will be impossible.

Genetic Links
While the general consensus among researchers is that CAD has a significant genetic component, genetics appear to only be a part of the story. Environmental factors such as climate, human population density, antibiotic therapy use in early life, and the mother’s diet while nursing have all been implicated in having some level of influence over future disease presentation. Mutations in certain areas of the genome have been suspected to contribute to this disease, but at this point, specific causal mutations have remained elusive. Given its complex nature, it is unlikely that we will find a genetic mutation that will help us completely eliminate CAD. However, identification of associated mutations in the future may help us in choosing more appropriate mates in order to decrease the likelihood of producing affected puppies through genetic testing of breeding animals and selective breeding programs.

If you believe your dog may be afflicted with CAD, a trip to your veterinarian or a board certified veterinary dermatologist would be the best bet at getting a handle on this frustrating disease. Therapies for this condition have improved greatly over the past ten years and are absolutely crucial in improving the lives of affected dogs. In the last two parts of this ongoing blog on itchy dogs, we will take a look at the creepy crawlers that feed on our dogs and make their lives miserable!