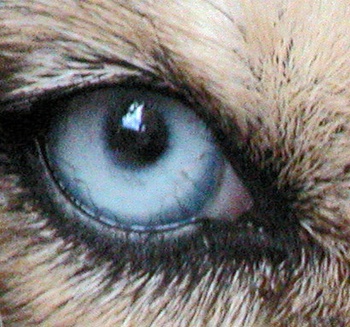 As most canine breeders can tell you, some of the diseases most commonly tested for in pure bred dogs are the eye diseases falling under the general term, Progressive Retinal Atrophies (PRA).  However, because the various types of PRA can present very similarly, many people are unaware that PRA is not just one disease, but is a general category of disease known to be caused by a number of different genetic mutations in several different genes.  The prevalence of each type of PRA varies by breed and some forms have only been identified in a single breed.  In addition to confusion regarding the variety of disorders grouped under the PRA label, there is often confusion regarding the method used to name the individual types of PRA seen.  A good place to start in understanding the common names of these diseases would be to look at the general types of the disease and how they manifest.  In order to understand the various types however, we must first learn a little about how the eye works.

The retina is a light-sensitive layer of sensory tissue that lines the inner surface of the eye.  Light that shines through the pupil of the eye hits the retina and triggers a cascade of electrical and chemical processes that leads to signal transmission to the brain where it is processed and interpreted, resulting in vision.  In the retina there are two main types of cells, known as photoreceptors, responsible for absorbing light and transmitting the signals resulting in vision.  The two types of cells are termed, rods and cones.

Rods are the most sensitive of the photoreceptors and are responsible for vision in low light.  The rods play very little role in color vision and are ineffective in allowing for good visual acuity. However, they do play a significant role in peripheral vision.  As light intensity decreases, rods will take over as the main photoreceptor and thus, visual acuity decreases in lower light.

Cones are the photoreceptors that are responsible for vision in brighter light and allow for color vision.  Though dogs have limited color vision in comparison to humans, dogs see more than just black and white as commonly believed.  Though humans have three types of cones responsible for allowing us to see a larger variation of colors in our world, dogs have only two types of cones.  Vision in healthy dogs, is limited to black, white, red-yellow, and blue.  The colors they can distinguish are believed to be very similar to a person with “red-green” color blindness.  Cones are responsible for vision of high acuity, a characteristic established by the particular way they are connected to the central nervous system.

In progressive retinal atrophy (or the similar human disease, Retinitis Pigmentosa), clinical signs of disease are associated with dysfunction of the particular cell type involved.  Signs of cone disease normally begin with a decreased ability to see in bright light.  Diseases of the rods normally begin with difficulties seeing in low light or “night blindness” and can also decrease the ability to distinguish various colors.

In dogs, the various progressive retinal atrophies have often been named according to the chronological order in which the photoreceptor cells are affected by disease.  By this convention, rod-cone dysplasias (rcd) are associated with early rod dysfunction followed by cone dysfunction and (as to be expected) cone-rod dysplasias (crd) are associated with early cone dysfunction, followed by the rods being affected.  Some disorders have no temporal association in regard to cell dysfunction and thus, both rods and cones are lost at essentially the same time.  These disorders are referred to by the more general name of photoreceptor dysplasias (pd).

In addition to the temporal association of retinal cell dysfunction, diseases are also characterized by their age of onset.  Developmental or early-onset PRAs are those that tend to occur in young animals, often within the first several weeks of life, and prevent the normal development of mature photoreceptor cells.  Late-onset PRAs are most commonly due to destruction of normally developed, mature photoreceptors in adult dogs.

PRA can be diagnosed through genetic testing of dogs from breeds in which the gene and corresponding mutation is known.  In cases in which the genetic cause of the PRA is not known, the disease can be diagnosed via ophthalmologic exam with a board-certified veterinary ophthalmologist.  National clubs of dog breeds known to carry a certain mutation often have policies that recommend for members to have their dogs screened annually or biannually until an established age.

Please note that there is currently some controversy over the test available for PRA-crd4/cord 1 as originally described in 2006 in the miniature long-haired dachshund by Mellersh et al (Genomics 88:293-301). The controversy stems from a 2012 study by Kuznetsova et al (Investigative Ophthalmology & Visual Science 53:5486-5501) that disputes the identification of the causative mutation by the Mellersh et al study. Paw Print Genetics has reviewed the medical literature on this subject. Because no affected animals were produced by Kuznetsova et al that did not have the previously described mutation and none of the animals in any of the studies were controlled for age of onset, which can vary in many of the PRA types, or controlled for type of PRA, as several breeds may have more than one mutation or gene affected that cause similar clinical features, Paw Print Genetics will continue to offer the test and will periodically review the literature in an effort to resolve this issue.

Breed of the Week: The Jack Russell Terrier