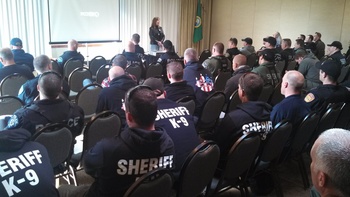 Most of the dogs were German shepherds, Belgian malinois and Labrador retrievers, although there were a couple of mixed-breed dogs and a very cool Dutch shepherd employed in the detection units. The K9 teams ran the gamut from veteran handlers and soon-to-be-retired dogs to rookie handlers and canines on the job less than a few months.

The drive the dogs had for their job, the precision with which they carried it out and the responsiveness to their handlers was awesome to watch. Whether it was the focus of a dog waiting to enter the training building, the anticipation and excitement displayed when passing near the obstacle course or the diligence of the search and alert to detection of a substance, the attitude and work ethic of the dogs was awesome to witness – these dogs are truly working dogs.

The dogs are put through rigorous training, and face incredible adversity while performing their duties. Patrol dogs track and help apprehend dangerous criminals, run through and over potentially hazardous surfaces and areas, and are constantly climbing, running and jumping on varied surfaces – often after sitting in a patrol car for several hours without the chance to warm up their muscles, tendons and joints. Detection dogs have to overcome masking agents used by those smuggling narcotics or explosives, can inhale caustic fumes and substances, must be disciplined enough to ignore reward-triggering items such as tennis balls and, in the case of roadside vehicle searches, must learn to safely conduct their examination among speeding traffic.

While environmental hazards pose risks, to a degree they must be accepted, and in most instances the dog can be trained as to how to best handle them. Genetic issues are another matter altogether.

Genetic issues, such as degenerative myelopathy in German shepherds, exercise-induced collapse in Labradors and several forms of progressive retinal atrophy in many breeds of dog, are avoidable with proper screening – which should take place before a department spends tens of thousands of dollars upfront on the dog and then invests man-hours in training time. If brokers and the kennels that departments are buying their service dogs don’t perform genetic testing prior to sale, the health guarantee should include specific language regarding a dog later screened as affected for a debilitating disease.

These dogs are the professional athletes of the canine world. Their upfront cost, continued training and veterinary care reflect that, too. Healthy canines that possess sound health can perform their duties better and possibly for years longer than those that do not.

Departments that screen their working dogs can save time and money, have a baseline for future diagnostic testing in the event of medical issues (which in turn can save time and money in treatment) and can knowledgeably conduct a breeding program that produces healthy puppies and future service dogs complete with the traits required to perform their job to the highest standards.

To that end, we thank the Spokane Police Department, as well as all the other departments statewide that participated in our sample collection and are working to help advance canine genetic health in service dogs everywhere.

Breed of the Week: Rottweiler