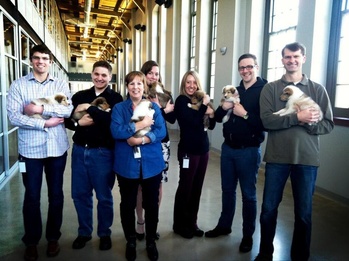 It is hard to believe that it has been a year since Paw Print Genetics opened its doors and started offering its testing service.  A lot has happened since then.  Prior to offering our testing services for inherited diseases of canines, we had a lot of work to do. We spent many weeks combing the medical literature with the goal of identifying all of the disease mutations associated with medical problems in dogs. After the mutations were identified in the public literature, we developed the tests that showed whether a dog had the normal or mutated DNA sequence.

For each mutation, two different tests were developed, so that each DNA sequence is examined two times in two different ways. This is how we achieved 100% accuracy and 100% reliability with our testing.  Once the two tests were developed, we then validated the tests. To do this, we enlisted the help from many of our current customers to provide samples on dogs that were known normal, carriers or affected with the diseases for which we developed tests. The results from these samples were submitted to the laboratory directors, PhD geneticists and licensed veterinarians, for review of the data without knowledge of the prior results on the dog.  Those tests in which 100% of the DNA sequences could be reliably and repeatedly identified correctly, were launched on May 1, 2013.

At that time, we launched 86 mutations for 70 diseases.  We immediately were offering the largest number of inherited disease tests for dogs. But we didn't stop there. On August 8, 2013, we launched the mutations for another 20 diseases, bringing our total number of mutations to 115.  Finally, in March of this year, we started offering another 27 mutations for 20 additional diseases bringing to current total to 142 mutations for 110 diseases – certainly the largest menu of inherited disease testing for over 200 breeds of dogs. Many of our tests are listed by the Orthopedic Foundation for Animals and the American Kennel Club Canine Health Information Center.

Among the diseases for which we offer testing are common diseases such as PRA-prcd, Exercise-induced collapse (EIC), degenerative myelopathy (DM), centronuclear myopathy (CNM), von Willebrand disease and ichthyosis.  In addition, we offer mutation testing for some very rare disorders such as the leukodystrophies, glycogen storage diseases and neuropathies.  That is what makes Paw Print Genetics the go-to laboratory for breeders, owners, trainers and veterinarians.  Whether you are screening a dog prior to breeding, selling or buying, or testing a dog to make or confirm a diagnosis, we offer what you need in one convenient location. We pride ourselves on our outstanding customer service, accurate and reliable testing, and a real, knowledgeable person on the other end of the phone helping you make important testing decisions in your dog.  Paw Print Genetic is truly your definitive resource for canine genetic health.

Breed of the Week: Bull Terrier