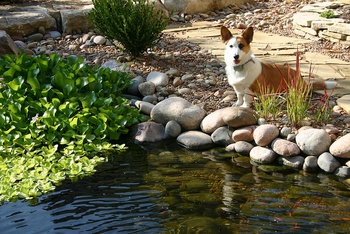 Its small size allowed it to nip the heels of cattle and to drive them further out to pasture, while also keeping it out of harm’s way of kicking bovine. Today, their small size still serves them if employed for farm work, but it also makes them good candidates to live in apartments or houses with small yards. They readily bark at approaching strangers, so make good guard dogs; training can help reduce the barking in apartments where strange noises and passing people are regular occurrences. Because of their working background, they do require daily exercise, and many owners enter their dogs in trials that include sheepdog, agility, obedience and rally obedience, as well as herding events, flyball, tracking and, of course, the conformation ring. Great companion animals, they are loving, even-tempered and want to be around their owners.

Their body, similar to a dachshund but heavier of bone and muscle, large upright ears, heavy double coat and long tail gives the Cardigan Welsh corgi a very distinct look. The long tail is perhaps the most distinctive difference from the Pembroke variety, which can have a long tail, naturally bobbed or docked tail. Cardigan Welsh corgis come in a variety of colors, including any shade of brindle, sable, red, blue merle or black. They stand 10½ to 12½  inches tall and top out at 38 pounds – females tend to be a bit smaller than males.

The Cardigan variety of corgi isn’t quite as popular as the Pembroke, likely due to the influence of Queen Victoria and the royal family, which favored them. Typically, however, the Cardigan ranks in the upper one-third of most-registered breeds – in the latest AKC statistics they were 75th out of 177 AKC recognized breeds (by contrast, the Pembroke was 25th).

With their size, intelligence and active lifestyle, corgis enjoy an average lifespan of 12 to 15 years. A 2004 health survey by the UK Kennel Club cited cancer as the leading cause of death in the breed, followed by old age and neurological disorders.

Two neurological disorders that can be tested for at Paw Print Genetics include degenerative myelopathy, which typically occurs between 6 months and 2 years of age and is equivalent of the fatal Lou Gehrig’s disease in humans, and exercise-induced collapse, which presents as exercise intolerance in apparently healthy young adult dogs and causes wobbly, uncoordinated gait. In some circumstances, the symptoms of collapse can progress to full body weakness, rigid limbs, confusion, loss of consciousness, seizure, and very rarely, death.

Testing of parents for these four serious disease mutations prior to breeding will help produce healthy puppies that better the breed and line of dogs, and that go on to live a long, healthy and happy life with their owners.

I've heard about cystinuria in Labradors. Should I be concerned?