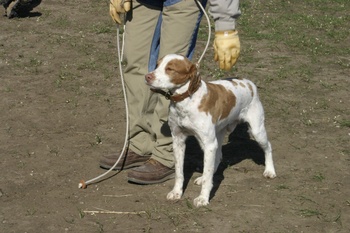 Brittanys are an energetic, athletic dog that are rockets in the field – they’ll work tirelessly in pursuit of birds and possess a sweet, biddable nature. They’re eager to please and tend to be softer than many bird dogs – heavy-handed corrections are rarely needed and usually aren’t beneficial to training. In addition to great upland-bird hunters, Britts are great family dogs – they’re not too large so do well in the suburbs (provided they’re given exercise and stimulation) and get along well with children.

The Brittany typically ranks around the 30th most-popular dog according to AKC statistics [https://www.akc.org/reg/dogreg_stats.cfm], and unlike most breeds that finds popularity, the breed hasn’t suffered from a huge between the conformation ring and the working field. Brittanys have more dual champions (those possessing champion titles in both the field and show ring) than any other breed in the AKC.

Fairly healthy dogs, Brittanys enjoy a lifespan of 12 to 15 years of age on average. They suffer from hip dysplasia, so be sure to buy puppies from breeding stock that has undergone evaluation. Additionally, at Paw Print Genetics, we test Brittanys for the immune system disorder known as complement 3 deficiency. By testing potential mating pairs for the disease, breeders can avoid producing puppies that will be affected.