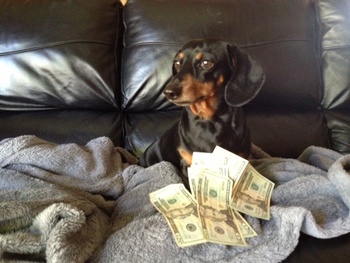 I recently overheard two people discussing the cost of raising a dog and genetic testing came up. One comment was: “Do you want to pay now for a healthy puppy or pay a vet later?”. She was referring to the cost of the testing versus the cost of paying for the long-term healthcare of a dog with an inherited disease.

In actuality, the cost of genetic testing may be less than the cost you would pay for a tooth cleaning or other routine, preventative care for your dogs. However, the genetic testing will last a lifetime and shouldn’t have to be repeated. Knowing the genetic profile of your dog will help you plan on whether you put the cost and time into training the dog and whether you eventually breed your dog. Genetic testing can improve the value of your breeding program by insuring the buyers that you have taken an active role in reducing the known genetic diseases in your lines.

Let’s take an example and walk through the health issues and costs. Hyperuricosuria, also known as urolithiasis, is a disease that affects at least 14 different breeds of dogs. Affected dogs develop bladder stones that may cause pain or blockage and might need to be removed.

Because there is a recurrence rate post surgery for new stones to form (about 36 percent the first year after surgery), there are yearly costs including the ongoing cost of prescription food ($785-$1100 per year) to reduce the formation of stones and a veterinarian’s examination, including radiographs, every 6-12 months ($200-$290 per visit) with a total, annual estimate cost of $415-$935, which does not include the costs of surgery if the stones were to reoccur.

Because this disease is inherited in an autosomal recessive fashion, the carriers of the gene mutation do not show symptoms, but when bred with another carrier, they may produce affected puppies. Therefore, the costs for disease diagnosis and health maintenance are quite large compared to the $80 per dog to test the prospective breeding pair for the genetic mutations to allow for breedings that do not produce affected puppies.

Interestingly, all Dalmatians are homozygous (mutant/mutant)   Meaning that all Dalmatians have the disease and will always pass the disease to their offspring. This makes Dalmatians a potentially expensive dog to own. The only way to eliminate this mutation from the Dalmatian breed is through outbreeding with a different breed that does not carry the mutation, which was the foundation for the Dalmatian-Pointer Backcross Project in 1973. The contentious project sought to introduce a normal gene into the breeding pool, thus making it possible to produce unaffected Dalmatians that don’t jeopardize the breed standard. With today’s genetic testing, it is possible to produce healthier dogs within every breed, or even develop new breeds, that are not affected with known diseases.

Do you have a test to screen for hip dysplasia?

Importance of Accuracy When Relying on Canine Genetic Testing