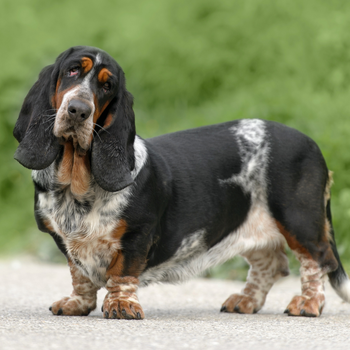 At Neogen/Paw Print Genetics (PPG), we are always exploring the current research to produce new tests for disease-causing mutations.  Every month new discoveries are made and published in the veterinary scientific journals.  On September 28, 2022, we added a host of new tests for disease-causing mutations in many breeds to our menu as we strive to be a convenient source for your genetic testing requirements. Listed here are the 20 new tests PPG is now offering and some of the breeds affected by these mutations.  Some of these new tests are for mutations that are rare, even within the associated breeds of concern.

New tests for the basset hound

We are thrilled to now offer a test for Lafora Disease.  This test for the late onset neurologic condition has been much anticipated for the basset hound, miniature wirehaired dachshund, and other breeds at risk.  Because Lafora Disease presents later in a dog’s life, knowing the status for this mutation and breeding appropriately will lower the frequency of the mutation within a population and reduce the number of at-risk/affected dogs.  The NHLRC1 mutation is a complex test that requires high-quality DNA. Therefore a Paw Print Genetics test kit or blood sample is needed to assess a dog for this mutation.  As an additional test for the basset hound, we are now testing for the COL7A1 mutation. Responsible for Dystrophic Epidermolysis Bullosa (DEB), this skin condition was found in a closely related family of dogs and the presence of the disease-causing mutation in the greater basset hound population is unknown.

Along with DEB, PPG is offering testing for Ectodermal Dysplasia, X-Linked (Dachshund Type) caused by the EDA mutation.  X-linked ectodermal dysplasia is inherited in an X-linked manner in dogs meaning that female dogs must receive two copies of the mutated gene (one from each parent) to develop the disease while male dogs only require one copy of the mutated gene from the mother in order to develop disease. Therefore, male dogs more commonly present with symptoms of the disease. Hereditary Nasal Parakeratosis (Greyhound Type),caused by a mutation of SUV39H2, may cause crusting of the skin around the nose and, although caused by a different mutation, is like a similar condition found in the Labrador retriever.  Oculocutaneous Albinism (Small Breed Type) is caused by a deleterious mutation of SLC45A2 that results in a form of albinism. Affected dogs are born with a generalized lack of pigment resulting in all white hair, pale eyes, and pink skin, lips, eye rims, foot pads, and nose. Ichthyosis is an understood condition affecting golden retrievers, but we are now offering a test for the TGM1 mutation that causes a similar condition, Ichthyosis (Jack Russel Terrier Type) in the Russel terriers. Finally, PPG has developed a test for the ATP2A2 mutation associated with Darier Disease and Associated Infundibular Cyst Formation.  Sometimes referred to as Canine Darier Disease, this skin condition presents in the Irish terrier.  In addition to these disease-causing mutations, PPG is now offering a genetic test for the ST Locus (Screw Tail, Bulldog and Terrier Type) trait seen in several bully breeds. This mutation is one of the defining features of the Bulldog and Boston Terrier, however, other bully breeds may be affected by having one copy of this mutation.

More tests for the Rhodesian ridgeback

There are two new tests for the Rhodesian Ridgeback.  Early Onset Adult Deafness (EOAD) which can affect rhodies as early as 4 months of age. This type of hearing loss is distinct among other types of deafness associated with loss of pigment or other etiologies. There is now a test for the F8 mutation associated with Hemophilia A (Rhodesian Ridgeback Type), a rare bleeding disorder within the breed. Another bleeding disorder mutation, GP9, associated with the disease Bernard-Soulier Syndrome in the cocker spaniel, is also now available.

Given the complexity of the eye, it is not surprising that there are many points along the genetic pathway in ocular development that can be disrupted by mutations.  PPG will expand the test for mutations associated with Progressive Retinal Atrophy (PRA) to include the CCDC66 mutation associated with PRA in the schapendoes breed and the IMPG2 mutation associated with Progressive Retinal Atrophy (Lhasa Apso Type).  In addition to the new tests for PRA, the ADAMTS17 mutation responsible for Primary open angle Glaucoma and primary lens luxation (shar-pei type) is now available for Shar-Pei breeders and owners.

Even more tests are available

Amelogenesis Imperfecta (Samoyed Type), like the condition in the Italian greyhound, is caused by a mutation of the SLC24A4 gene.  Glycogen Storage Disease IIIa is caused by the AGL mutation and is an inheritable metabolic disorder in the curly coated retriever.  Now able to test for the INPP5E mutation means breeders of the Norwich terrier can avoid Diffuse Cystic Renal Dysplasia and Hepatic Fibrosis. An inheritable condition which affects the kidneys and renal system in Native American Indian dogs is caused by a mutation of the APRT gene resulting in Urolithiasis (Native American Indian Dog Type) a form of bladder stone. Lundehund Syndrome presents as severe gastrointestinal disease (GI) in the Norwegian Lundehund. A mutation of the ACSL5 gene is associated with Intestinal Lipid Malabsorption in the Australian Kelpie Dog and related breeds. This is another GI disease that can inhibit growth and lead to chronic medical issues in affected dogs.

If you have any questions about these new tests, or any tests for your breed, we are here to help. Simply email us at PPGAskUs@neogen.com and one of our geneticists or veterinarians will reach out to you. If you prefer a phone call, please include your number in your email message to us.  We are here to help you understand the tests available to you for your breed, provide you with support during the ordering process, and will be happy to follow up with you after your testing has been completed should you have any questions.  By testing your dams and sires prior to breeding, you will be able to produce the healthiest pups possible.