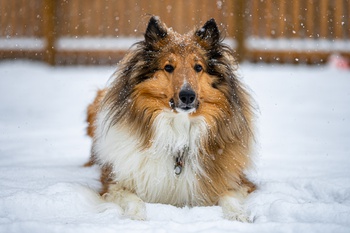 In one study, 19% out of 146 apparently healthy Norwegian buhunds tested carried one copy of the KCNIP4 mutation suggesting that this mutation may be found in high frequency in the buhund’s relatively small population. 1 However, the exact frequency of this mutation in the overall breed population is unknown.

Ichthyosis (golden retriever type 2) is an autosomal recessive, non-epidermolytic ichthyosis affecting the golden retriever, and is the second disease of this type identified in the breed. Dogs inheriting two copies of the associated ABHD5 gene mutation present early in life with white to gray, non-inflammatory skin scaling throughout the hair coat and concave surface of the pinnae. Skin on the abdomen may become hyperpigmented. Some severely affected puppies have been reported to display a swollen, tight appearance of the skin, skin resembling ‘cracked glass’, and deep cracks resulting in bleeding. However, full clinical descriptions of dogs affected with type 2 ichthyosis are limited.

It should be noted that a more common genetic mutation in the PNPLA1 gene is well known by breeders to cause a similar form of ichthyosis in golden retrievers (known as golden retriever type 1).5 Although ichthyosis type 2 is generally reported by breeders to be more severe than type 1, the severity of both types can vary by individual or blood line. Descriptions of dogs affected with both types of ichthyoses simultaneously are lacking.

The frequency of the ABHD5 mutation is unknown in the overall golden retriever population but is generally believed to be less common than the PNPLA1 mutation associated with ichthyosis (golden retriever type 1). Testing for both mutations is indicated for golden retrievers displaying clinical signs of ichthyosis. Humans with mutations in the ABHD5 gene are known to develop Chanarin-Dorfman syndrome; a syndrome marked by ichthyosis, dysfunction of lipid metabolism, and excessive lipid storage throughout various organs and tissues of the body. Similar dysfunction of lipid metabolism or storage have not yet been documented in dogs with ABHD5 gene mutations, however additional study is required to assess this potential risk.

In one study, 4.6% of 281 Rottweilers tested were found to carry one copy of the VPS11 mutation.7 However, the frequency of this mutation in the overall Rottweiler population is unknown.

Recurrent inflammatory pulmonary disease is an autosomal recessive disease affecting rough and smooth collies. Dogs inheriting two copies of the associated AKNA gene mutation present within the first few weeks of life with signs of inflammatory respiratory disease, including shallow, noisy breathing, nasal discharge, cough, and fever. Affected dogs respond favorably to treatment for respiratory infection, however clinical signs recur quickly upon cessation of therapy. Dogs can be maintained with medical therapy for many years despite continuing to have signs of respiratory disease throughout their lives. While the exact molecular cause of this condition is still undetermined, AKNA is known to encode a protein which plays a crucial role in immune system regulation. Although different in its etiology, this disease presents very similarly to primary ciliary dyskinesia and should be on a veterinarian’s list of differential diagnoses in cases of recurrent respiratory infection involving collies.

The frequency of the AKNA gene mutation in the overall collie population is unknown. Population screening for this mutation has only been described in a small subset of collies including dogs confirmed to be relatives to known affected dogs. In that study, 21% of 85 rough collies tested were carriers of one copy of the mutation. However, given the population studied, it is probable that the actual frequency of the mutation in the overall collie population is lower.

If you have questions about how Paw Print Genetics can assist with genetic testing in your veterinary practice, please contact our knowledgeable geneticists and veterinarians at AskUs@pawprintgenetics.com or give us a call during business hours (8 am to 5 pm Pacific time, Monday to Friday) at 509-483-5950.