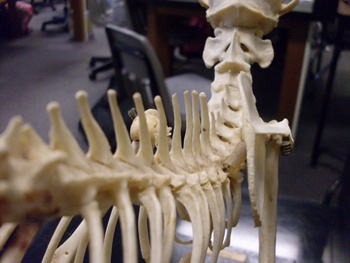 Intervertebral Discs and the Spinal Cord

In order to understand IVDD, we must first understand the role, location, and structure of the intervertebral discs (IVDs) and their anatomical relationship to the spinal cord. IVDs play a crucial role as cartilaginous ‘shock absorbers’ for the spine and allow for spinal flexibility. IVDs are often compared to a ‘jelly doughnut’ sitting between the vertebrae as they are composed of an outer ring of tough fibrous tissue known as the annulus fibrosus that is filled with a gelatinous inner layer known as the nucleus pulposus.

The spinal cord runs from the brain stem to the tail in a protective bony pathway called the spinal canal which is formed by aligned holes in each vertebra (known as the vertebral foramina). However, from vertebrae to vertebrae, the spinal cord travels a short distance across the ‘intervertebral space’ in which there is no bony protection. In this space, the spinal cord lies adjacent to the IVDs. The clinical signs associated with IVDD occur when malformations or degenerative changes in IVDs result in bulging or herniation of IVD material into the adjacent spinal cord in this unprotected space. Subsequent compression, injury, hemorrhage, and inflammation of the spinal cord results in the severe pain and neurological dysfunction commonly seen in IVDD-affected patients.

IVDD occurs as a result of degenerative changes which weaken the structure of IVDs and allow for their protrusion or herniation into the spinal cord. However, it is important to differentiate the variation in types of IVDD to recognize which type is also associated with shortened limbs.

All dogs of advanced age are known to be at risk for one form of IVDD known as Hansen type II IVDD (named for the scientist which defined IVDD types in the 1950’s)3. Type II IVDD is a chronic type of IVDD associated with age-related degenerative changes which occur in every dog (though not every dog will develop clinical signs of type II IVDD) and is especially common in large breed dogs. Dogs with type II IVDD develop cartilage weakness and bulging of IVDs causing compression of the spinal cord, resulting in pain and neurological dysfunction. Some dogs with type II IVDD develop permanent neurological dysfunction due to chronic injury, resulting in an abnormal gait or difficulties rising from a prone position. While this type of IVDD is a chronic condition which may increase in severity with age, acute ‘flare-ups’ can cause significant pain and inflammation resulting in decreased mobility and quality of life. Dogs with this type of IVDD are often managed during flare-ups with rest, pain medications (anti-inflammatory or opioids), and/or muscle relaxers to make them comfortable and to regain pain-free mobility. However, these acute episodes often recur throughout the dog’s life. In some cases, it may be indicated to manage affected dogs with long-term pain therapy. Although dogs with type II IVDD experience discomfort and may develop chronic neurological problems secondary to disc protrusion, most will only experience clinically significant bulging in a handful of IVDs at most and only rarely experience a decrease in quality of life significant enough to justify surgical intervention. While genetics probably play a role in the age of onset and severity of type II IVDD, it is generally considered a disease of normal aging in any breed and is not generally associated with shortened limbs.

In contrast to type II IVDD, Hansen also identified a generally more severe type of IVDD known as Hansen type I, that on average occurs in younger dogs than type II IVDD, and is now understood to be more common in short-legged dogs inheriting the FGF4-retrogene insertion on CFA122,3. Type I IVDD is marked by early-onset degeneration of IVDs (beginning before the age of 1 year) in which the tissues of the IVDs undergo significant degradation, calcification, and replacement by other tissue types (a process called chondroid metaplasia). Unfortunately, early degeneration of IVDs not only increases the risk of early-onset IVDD, but also increases the risk of traumatic, explosive herniation of IVD material into the spinal canal, often resulting in severe pain, inflammation, hemorrhage, and neurological impairment including partial or complete paralysis. IVD ruptures of this severity are often considered an emergency requiring immediate surgical decompression of the spinal cord to limit permanent spinal cord damage and subsequent sensory and motor dysfunction. In some cases, the dog’s prognosis may be poor enough to justify humane euthanasia. For this reason, discovery of the CFA12 FGF4 insertion was met with great anticipation and excitement by dog breeders as this discovery was the first step in developing genetic testing which had the chance of helping them eliminate type I IVDD from their blood line2. However, in some breeds, we must temper our expectations for what this testing may allow us to achieve when it comes to reducing IVDD incidence.

Appropriate breeding decisions regarding dogs which have inherited the CFA12 FGF4 insertion need to address both the potential loss of genetic diversity in a population which would occur if dogs with this mutation were prohibited from breeding as well as the loss of the short-legged appearance that is a defining physical characteristic for some breeds. In breeds which are known to inherit both mutations associated with short-legged appearance, breeders may be able to use results of genetic testing to selectively breed for the CDPA (CFA18 FGF4 insertion) mutation while breeding away from the CDDY and IVDD risk (CFA12 FGF4 insertion) mutation in order to reduce IVDD risk and retain a short-legged appearance. However, the frequency of each mutation varies between breeds and in some cases, may not be conducive to such a breeding strategy. For example, breeds with extreme limb shortening (e.g. basset hound, dachshund, corgi) typically develop their appearance due to inheritance of both the CFA12 and CFA18 FGF4 insertions. Therefore, elimination of either mutation from breeds with extreme limb shortening, may result in offspring which exceed breed standard leg length. Similarly, breeding strategies to eliminate IVDD in breeds expected to have moderately short legs may result in offspring with legs which are too long to meet breed standards if born without either the CFA12 or CFA18 FGF4 insertions.