Tweet
by Lisa Shaffer on March 2, 2019 in Trixie's Paw Prints 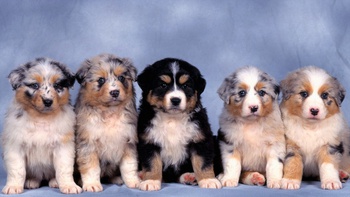 Photo showing the diversity of coat colors and patterns within the Australian Shepherd.

As a laboratory that works directly with breeders and dog owners, Paw Print Genetics (PPG) is often asked to reassure the customer that our tests accurately determine whether a dog will get a disease.  The customer is actually asking a couple of different questions; one involving the accuracy of the test itself and one regarding the clinical validity of the test. It is important to understand the questions being asked so that the answers make sense.

The first question being asked is: Does the test perform accurately to determine if a dog is normal/clear, a carrier of one copy of the mutation or at risk, having two copies of the mutation. At PPG, our tests are extensively validated and must show 99.9% specificity and sensitivity before being available for ordering. Sensitivity is defined as the proportion of samples with a known mutation that are correctly classified/identified as carrier or at risk by their genotypes. Specificity is defined as the proportion of samples with no known mutation that are correctly classified/identified with the wildtype (normal) genotype for the disease.  This all refers to whether the test result accurately reflects the true genotype of the individual. At PPG, this is 99.9%. No laboratory can claim 100%, but at PPG, because we test your dog’s sample twice with two different methods, we have one of the highest accuracy rates in the industry.

Sometimes the same question is asked another way: What is your false positive rate? False positive means that the laboratory mistakenly identified a normal/clear as carrier or at risk. A false negative means that the laboratory mistakenly identified a carrier or at risk as clear/normal. At PPG, this is very rare, about 0.1% of the time, but it can happen. No laboratory can claim 100% accuracy because there are biological reasons why some samples don’t ‘behave’ properly during the analysis and may produce the wrong genotypes upon testing.

How can it happen that a false positive or false negative is produced?  This situation usually happens when one of the alleles of a gene is not identified. Most genes in the dog genome come in pairs, one copy is inherited from the mother and one copy is inherited from the father. It is important that the methods used examine the DNA from both the maternally inherited (mother’s) copy and the paternally inherited (father’s) copy. Sometimes, there is a DNA change near the mutation, called a polymorphism, that can interfere with a test such that one of the copies (either the mom’s contributed copy or the dad’s contributed copy) is not revealed to us in the results. In these instances, the results of the dog’s DNA being examined either looks normal (two copies of the normal, wildtype allele) or at-risk (two copies of the mutated allele). This phenomenon is called Allele Dropout.

Although allele dropout occurs very rarely among all the tests that we perform, it can happen to any sample and that is why PPG implemented standards and guidelines that were established for human testing and recently published the first set of canine-specific standards and guidelines. These documents describe how laboratories can improve their accuracy by testing each DNA sample twice with two different methods. By testing the DNA twice, we are less likely to report a case with allele dropout because while one method may show allele dropout, the second method is used to catch these instances to allow the laboratory to explore further why the two tests show different genotyping results.  At PPG, when this happens, we may use a third method to genotype the sample, we may repeat the sample with the previous methods or we may ask for a new sample and start the testing process over. Although this approach may delay us in reporting a final result, accuracy is our number one priority, as we know that breeders are using the results to make decisions about breeding and whether to spay or neuter a dog.

Laboratory accuracy is very different from Clinical Validity.  Laboratory or test accuracy refers to the question of false positives or false negatives, specificity and sensitivity. Clinical validity is whether the ‘at-risk’ genotype actually predicts disease.  Genetic diseases are rarely black and white, yes or no, all or none. There are other factors that influence whether a dog will get a clinical disease. Some diseases have Variable Expressivity meaning that dogs with the same at-risk genotype may show variable signs of disease with some being very mild, while other dogs with the same genotype have a severe form of the same disease. Another factor to consider is penetrance. Some dogs with the at-risk genotype never show disease while others do. This is called Incomplete Penetrance and there are many diseases like this that show incomplete penetrance.  Variable expressivity and incomplete penetrance are factors that breeders may have a hard time understanding. Why do some dogs with the same at-risk genotype get the disease while others do not? There are likely environmental and genetic factors that we currently don’t understand that will influence whether a dog shows symptoms of a disease and doing research to uncover these environmental or genetic influencers or modifiers is difficult.  But knowing that a disease can show variability in the symptoms or age of onset, or may not affect the dog at all (incomplete penetrance) can help provide an understanding of the complexities of genetic inheritance.

However, breeders should still be encouraged to test for mutations even in disorders that show variable expressivity or incomplete penetrance. If a marker is known that can be tracked within a breed that causes some dogs to have disease, then it seems prudent to use that information to try to avoid producing pups with at-risk genotypes, even if the chance of manifesting the disease is low.  In most cases, there is no risk to the genetic diversity of the breed if breeders continue to use carriers and breed them only to clear dogs to ensure that only carriers and clear pups are produced in the next generation. This breeding practice can maintain diversity in the breed while still controlling for genetic disease.

Finally, we have tested dogs that test clear for all known mutations but still developed a particular disease. This phenomenon is called Genetic Heterogeneity. Heterogeneity means that more than one gene mutation, usually in different genes, can cause the same clinical signs of disease. There are many examples of this, but Progressive Retinal Atrophy (PRA) is probably the best example.  There are more than 15 different gene mutations known that give rise to the clinical signs of PRA. In general, when the ophthalmologist looks into the dog’s eyes, almost all of the PRAs look the same to the doctor. Some PRAs may have different ages of onset or different rates of progression, but from a clinical examination perspective, many look the same. Only through genetic testing can we see the differences and identify that they are each caused by a different gene mutation.  Golden retrievers are the extreme example. We know of three different mutations that cause PRA in golden retrievers and those three different mutations still don’t explain all cases of PRA in this breed. It is unfortunate, but not surprising to us as geneticists, when a dog with a disease does not demonstrate any of the known mutations.  Dogs have about 20,000 genes in their genome and any one of these genes has an almost infinite number of possible mutations that might cause disease. Thus, there will be dogs that develop a disease even though they tested clear for all known mutations.

New mutations in dogs are being discovered at an increasing rate since the dog genome was sequenced. Therefore, although PPG offers about 200 different mutations at this time, I predict that in 10 years, we will offer nearly 1,000 mutations for various dog breeds and diseases. But don’t be concerned, as it is part of PPG's responsibility to monitor these diseases and their detection frequencies within a breed. You may find that at times we move tests to the Essential Panel for your breed or move a test to a Supplemental Panel for your breed. Redistributing the tests based on frequency of mutation detected or severity of disease will allow you to use these tests in a cost effective and purposeful manner to control for these mutations within your breeding program.

If at any time, you have a question about a result in your dog or a concern about a particular test, we urge you to contact us. We strive to provide you the most transparent care for your dog. It is our goal to provide you the testing that you need, with the highest accuracy and the best customer service. We want to hear from you about how we can better help you produce the healthiest puppies possible.

The Veterinarian’s Corner: Genetic Heterogeneity and Its Importance in Dog Breeding