Tweet
by Casey Carl on April 16, 2019 in Ask The Vet , The Veterinarian's Corner 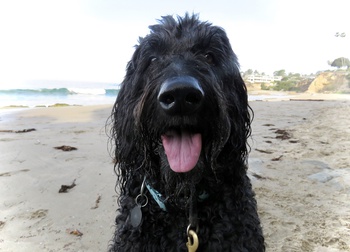 The discovery of various disease-associated genetic mutations has greatly changed the way some inherited canine diseases are categorized and perceived by the veterinary community. Through the use of genetic testing developed to identify these discovered mutations, various diseases which were once assumed to have a single underlying molecular cause (due to similarity between disease states) have been found in some cases to actually be caused by many different mutations, often in different genes. This phenomenon, known as genetic heterogeneity, elucidates the way genes work together in pathways and how a disruption in different genes of a pathway may result in similar or nearly identical disease states despite seemingly disparate underlying molecular etiologies. Understanding that there may be one of many different genetic mutations responsible for a dog’s clinical signs can help plot a better course for veterinarians to obtain an accurate, definitive diagnosis and in some cases, may alter treatment strategies.

The accuracy and specificity of an inherited disease diagnosis are particularly important in the world of dog breeding where every potential health issue must be considered prior to breeding. Unlike general pet owners who may not need to know the specific underlying molecular mechanisms of a disease (especially when there is no routine clinical treatment), the world of dog breeding has grown increasing savvy about the potential of genetic testing technologies and their use in preventing production of diseased puppies. Armed with parental genotypes for a specific mutation and an understanding of the inheritance pattern of the associated disease, breeders around the world are eliminating specific health concerns from their blood line through informed selective breeding practices. However, in order for a veterinarian to make appropriate genetic testing recommendations to pinpoint the cause of a disease, it is important to consider which mutation or mutations are known to be inherited in the particular breed presented to them. Though some ancient mutations that arose prior to breed development and isolation can be found in a large number of diverse dog breeds, mutations arising after the advent of our modern breeds may only be found in a single breed or even a single bloodline.

Two specific categories of diseases in dogs with arguably the most genetic heterogeneity are those resulting in blindness and in blood clotting abnormalities. Progressive retinal atrophy and von Willebrand’s disease are two diseases of dogs with numerous associated mutations resulting in blindness and clotting dysfunction, respectively. Discovery of these mutations has led to the categorization of these diseases into numerous subgroups based upon the underlying mutation or nuances in clinical signs.

Mammalian phototransduction is a complex process involving interaction of gene products from dozens of various genes resulting in the conversion of light to an electrical signal which is eventually interpreted by the brain as vision. Disruption in any of these gene products via genetic mutation may result in various inherited diseases of vision. Therefore, finding the specific genetic factor associated with blindness in the dog on the exam table is not always an easy task, but a crucial one for dog breeders, if possible. Though definitely not the only inherited cause of blindness in dogs, mutations associated with the condition, progressive retinal atrophy (PRA) have been discovered in at least 18 genes, making it one of the most common causes of canine vision loss.1 In addition, clinical PRA has been documented in many breeds for which an underlying genetic cause has yet to be identified.

PRA is a well-documented group of diseases, each with similar progressive clinical signs, eventually resulting in blindness. Commonly diagnosed via complete ophthalmic exam, classic signs of this disorder result from bilateral, progressive degeneration of the retina and include tapetal hyper-reflectivity, attenuation of retinal blood vessels and pigmentary changes to the non-tapetal fundus and optic nerve head. Dogs may present with generalized loss of vision or difficulty seeing at certain levels of light intensity. Though clinical signs of PRA are nearly identical on eye exam (regardless of cause), age of onset, speed of disease progression, and the relative speed at which rod and cone photoreceptors each degenerate may vary by the specific mutation involved and the genetic background of the individual. After a clinical diagnosis of PRA is made via eye exam, uncovering the genetic factor responsible for the condition is often possible, but not always straight forward.

Given that nearly two dozen PRA-associated mutations have been described in dogs, randomly performing genetic testing for one of these mutations is not likely to be helpful. However, having an understanding that there may be various genetic factors involved in PRA for any given dog and having a resource such as Paw Print Genetics (which currently offers testing for 16 different PRA-associated mutations from dozens of breeds) may be all a veterinarian really needs to remember when trying to help a dog breeder work around this inherited concern.

Similar to phototransduction, the genetic complexity of hemostasis is difficult to overstate as products from dozens of genes interact directly or indirectly in two general processes known as primary and secondary hemostasis; simultaneous processes occurring after injury to prevent blood loss.2 As a refresher, primary hemostasis involves platelet adhesion to wound sites, activation and recruitment of additional platelets, and the formation of the primary platelet plug. Secondary hemostasis (also called coagulation) involves a complex series of reactions between a large number of different coagulation factor proteins and cells culminating in cross-linked fibrin strands serving to strengthen and stabilize the original platelet plug.2

Of the 13 different coagulation factors involved in the blood clotting cascade, several mutations severely disrupting secondary hemostasis have been described in dogs including those associated with deficiencies in coagulation factors VII, VIII (hemophilia A), IX (hemophilia B), and XI. However, in clinical practice, disorders of primary hemostasis, particularly various types of inherited von Willebrand disease (vWd), are commonly diagnosed explanations for excessive bleeding during trauma or surgery.

Von Willebrand disease is a disorder caused by a qualitative or quantitative deficiency in the plasma protein, von Willebrand factor (vWf) and its large multimers which play an important role in platelet adherence to wound sites. Various mutations in the VWF gene have been implicated in von Willebrand disease of variable severity. Von Willebrand disease is categorized into three general types (I, II, and III) based upon the overall severity of disease and vWf deficiency. vWd Type I is generally the least severe while vWd type III often results in severe, lethal bleeding, even from minimal trauma, due to a complete lack of vWf. The specific location of the mutation within the gene and the resultant deleterious consequences to the vWf protein and its multimers are determining factors in disease severity. However, vast differences in severity of disease also occurs within vWd types between individuals inheriting the same mutation, suggesting that other genetic factors are important in modulating overall risk. To this author’s knowledge, compound heterozygosity resulting in vWd has not yet been described in dogs despite the fact that all known associated mutations have been found in the same gene and reports of this phenomenon in humans.

Though therapeutic and preventative options are unlikely to differ between vWd patients (regardless of disease type), discovering the specific mutation involved may be crucial to the health of future litters from a blood line with one of these mutations. After diagnosis of vWd is made via buccal mucosal bleeding times or plasma protein analyses (e.g. vWf antigen assay), finding the specific mutation responsible is often possible through genetic testing and of incredible importance to dog breeders. Though many breeds known to develop vWd type I have inherited the same documented mutation, some dog breeds known to develop vWd type I do not share this mutation, suggesting that other, undiscovered mutations are probable. Up to this point, discovered mutations responsible for vWD type II or III in dogs have only been found in individual breeds and in related breeds only differing by superficial traits (e.g. hair length).

Not all dogs are purebreds and the specific mix of breeds in individuals is often unknown and difficult to determine visually. In these cases, veterinary clients may still wish to pursue genetic testing to help find the specific mutation responsible for their dog’s health woes or to be proactive regarding potential future health concerns. Though it is not as easy to use breed specific genetic testing in mixed breed dogs with unknown parents, genetic screening products such as the Canine HealthCheck (CHC) can test an individual dog for a large number of mutations (segregating in many breeds), all at the same time. Among the 150+ tests performed in the kit, the CHC includes tests for 21 different mutations associated with poor blood clotting (including 4 different mutations associated with von Willebrand disease) and 22 different mutations associated with vision loss (including 12 mutations associated with progressive retinal atrophy). The CHC kit is a cost-effective way to screen any dog for a large number of mutations that could potentially be affecting their quality of life and may assist the veterinarian in making care decisions for the dog.

If you have questions about a case involving blindness or blood clotting abnormalities or have any other questions related to inherited canine diseases, please feel free to contact the friendly Paw Print Genetics veterinarians and geneticists at askus@pawprintgenetics.com or 509-483-5950 (Monday through Friday; 8 am to 5 pm Pacific time).

The Complexities of Genetic Testing and Counseling: Accuracy, Penetrance and Validity, Oh My!

Fireworks and Fido: How to Make It Through the July 4th Holiday