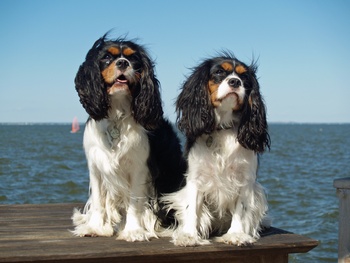 There aren’t many things sweeter in life than a cavalier King Charles spaniel (CKCS). From their friendly, outgoing demeanor to their adorable, pouty eyes, they have definitely become one of my favorite breeds over the years. It appears that others understand my enthusiasm for the breed as well. In the fifteen years from 2002 to 2017, CKCS have moved up from 40th place to 19th place on the AKC’s registration statistics and are one of the most popular breeds in the United Kingdom. Unfortunately, like other popular dog breeds, cavaliers have their share of inherited diseases that can potentially reduce their quality and quantity of life. At Paw Print Genetics, we strive to control these diseases for our canine companions.

One interesting yet, debilitating disease unique to the CKCS is an inherited neurological condition first reported in 19831, known as episodic falling syndrome (EFS). Affected dogs begin showing signs of spastic muscle contractions of the limbs and trunk between 14 weeks and 4 years of age particularly during exertion, excitement, or frustration. As an episode starts, affected dogs most commonly develop rigid hind limb extension, a convex bending of the spine (“roach backed”), and hold their head near the floor, assuming a “praying” position. However, some dogs develop rigid extension of all four limbs. Many dogs also collapse or roll to one side and have difficulty getting back on their feet. The episodes last from several seconds to several minutes and the dogs appear neurologically normal between episodes. In some cases, episodes last much longer. Disease progression is unpredictable with some dogs improving with age while others become more severe. EFS is an autosomal recessive disease meaning that dogs must inherit two copies of the mutation (one from each parent) to develop the condition. Though it does not decrease life expectancy, most dogs will continue to have episodes throughout their life. There are several video examples online of dogs having episodes of the disease.

Though similar in its presentation to exercise-induced collapse, centronuclear myopathy, startle disease, focal seizures, and a variety of muscle disorders, EFS has a unique molecular cause and is the only known inherited disease due to a mutation in the canine BCAN gene. Though the overall incidence of the disease causing mutation is unknown in the CKCS population, one study identified that 13% of 155 CKCS with no history of EFS carried one copy of the EFS mutation2. CKCS are the only dog breed known to carry this mutation.

Two major treatment options have been reported to be helpful for EFS patients. Clonazepam (a close relative to valium), a drug used to treat “startle disease” in humans, has proven to be helpful in some EFS patients3. Unfortunately, dogs appear to develop tolerance to the drug with time and the therapeutic effects of the drug decrease. Another drug, acetazolamide, has been used with some success in EFS patients as well3. However, many dogs do not tolerate the drug well due to significant side effects. Given the difficulties associated with the two most effective EFS medical treatments, the significant decrease in life quality, and the relatively high estimates of EFS mutation carriers, genetic testing of dams and sires for the mutation prior to breeding should be considered the gold standard for eliminating the disease from the breed. Knowledge of EFS carriers can allow for selective breeding and prevention of affected puppies. Dogs affected with EFS should not be bred and carriers of the EFS mutation should only be bred with animals that are free of the mutation.

For all the joy the CKCS brings to people all over the world, wouldn’t it be great if we could eliminate or greatly reduce the incidence of this detrimental disease from the breed? With modern genetic testing, not only is it possible, it is affordable to do so. I have aspirations that someday every dog breeder will consider genetic testing an obligation to their favorite breed as payment for the richness and value that canines bring to our lives. A world with less canine suffering and happier, healthier breeding programs would surely be a considerable start!

Why is a Dam’s Sample Needed for Parentage Testing?