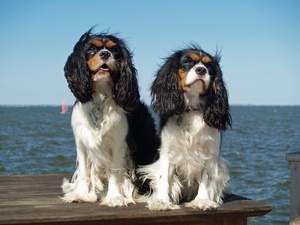 There aren’t many things sweeter in life than a cavalier King Charles spaniel (CKCS). From their friendly, outgoing demeanor to their adorable, pouty eyes, they have definitely become one of my favorite breeds over the years. It appears that others understand my enthusiasm for the breed as well. In the fifteen years from 2002 to 2017, CKCS have moved up from 40th place to 19th place on the AKC’s registration statistics and are one of the most popular breeds in the United Kingdom. Unfortunately, like other popular dog breeds, cavaliers have their share of inherited diseases that can potentially reduce their quality and quantity of life. At Paw Print Genetics, we strive to control these diseases for our canine companions.

One interesting yet, debilitating disease unique to the CKCS is an inherited neurological condition first reported in 19831, known as episodic falling syndrome (EFS). Affected dogs begin showing signs of spastic muscle contractions of the limbs and trunk between 14 weeks and 4 years of age particularly during exertion, excitement, or frustration. As an episode starts, affected dogs most commonly develop rigid hind limb extension, a convex bending of the spine (“roach backed”), and hold their head near the floor ... 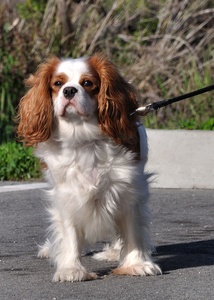 The Cavalier King Charles spaniel, a toy breed best suited as a companion pet, has a very interesting history that perfectly – one that exemplifies how humans have manipulated canine genes through selective breeding.

The ancestry of toy spaniels, from which the Cavalier and closely related King Charles spaniel descend, can be traced to the Far East (likely Japan, which suggests a common ancestry with the Pekingese). It’s believed that these toy spaniels were given to European royalty as gifts.

History shows that the earliest recorded appearance of a toy spaniel in England was in a painting of Queen Mary I and King Philip in the early 1500s. However, it was during the reign of King Charles II (1649-1685) that the small spaniel breeds exploded in popularity – and from when they were first identified with the monarchy by name. So enamored with them was Charles, that the dogs reported had complete freedom within Whitehall Palace – and that Charles had a tendency to pay more mind to the dogs than visitors and state business.

The toy spaniels of Charles’ day were said to possess a flatter skull and short noses, which is the biggest distinction between the two breeds ...