Tweet
by Casey Carl on April 3, 2018 in The Veterinarian's Corner 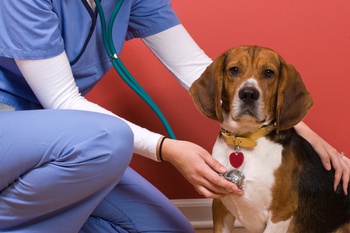 The often-debated biological argument of “nature versus nurture” is at the center of the challenging considerations dog breeders must make in their effort to produce the healthiest, happiest, and most beautiful dogs they can. Breeders routinely contact the veterinarians or geneticists at Paw Print Genetics (PPG) looking for genetic testing to identify dogs that may be at risk of producing puppies with certain diseases. Given the emotional, temporal, and monetary damages associated with being forced to remove a dog from a breeding program, it is important for breeders to understand whether the disease in question appears to be inherited or whether there might be a more likely environmental explanation for what they see in their blood line. However, when no genetic testing is available for a particular condition, the answer to the question of nature versus nurture may not be quite as straight forward as it may seem at first glance. Keeping your mind open to environmental factors associated with disease might prevent your clients from having to remove their prized breeding dog from their gene pool.

As a veterinarian, one of the great joys of helping improve the genetic health of dog kennels are the many interesting cases that are presented to me. I was particularly intrigued recently when a breeder and PPG client contacted me to discuss a litter (the first by this dam) of six boxer puppies which were all born apparently male. After a little math, I determined that a female dog would have a 3.2% chance of giving birth to six puppies of the same sex (assuming an equal likelihood of producing male or female). I had seen rarer things happen in dogs, but when the breeder told me that she thought she may have accidentally played a part in the apparent gender of some of the puppies, I suspected that this wasn’t going to be a simple situation.

The breeder stated that three puppies in the litter were born with relatively small penises and each displayed cryptorchidism. Veterinary records of an exam on one of the abnormal puppies noted that the puppy displayed a “caudal prepuce positioning”, but that the pup’s penis and urethral opening appeared normal on extrusion. An ultrasound report from the same puppy described a tubular structure in the caudal abdomen between the urinary bladder and colon that “may represent a uterine body”. However, the veterinarian noted that neither uterine horns nor intra-abdominal ovarian tissue could be identified. Sadly, two of the three abnormal puppies had to be euthanized for apparently unrelated health problems in early life (one aspirated and died while the other had a severe midline defect). Interestingly, cursory necropsies performed on both puppies by the attending veterinarian had identified underdeveloped uteri and ovarian-like structures; thus, adding additional support to the ultrasonographer’s suspicion of a uterine body. However, histopathology was not performed on the suspected ovarian or uterine tissues to confirm the tissue type in either puppy.

The original purpose of the breeder’s call was to see if PPG could determine the chromosomal sex of the abnormal puppy that was still alive and to ask if we had any information we could give her about the cause of the condition. DNA profiling was ordered for the puppy and results showed that this puppy did indeed have two X chromosomes despite external male genitalia.

Various disorders of sexual development (DSD) have been described in mammals. However, the number of described conditions in dogs resulting in male sexual anatomy despite being a chromosomal female is relatively small. Among those with inherited etiology, a disorder referred to as XX Disorder of Sexual Development (XX DSD) is believed to be the most common DSD in dogs. Variations in the copy number of DNA segments near the SOX9 gene as well as mutations resulting in decreased expression of the RSPO1 gene have both been implicated as underlying causes of this particular DSD type though unknown DSD-associated mutations likely exist. Female dogs with this type of DSD are born with variable levels of masculinization of the sexual anatomy. In one type of XX DSD, a piece of a Y chromosome containing the gene known as SRY translocates to an X chromosome during spermatogenesis. Given that the SRY protein is heavily involved in male sexual development, the resulting sperm with the modified X chromosome (called SRY-positive) contains genetic information that will produce a chromosomal female puppy, while at the same time, containing the genetic blueprints for male anatomy.

Another relatively common inherited DSD in dogs is a disorder known as persistent Müllerian duct syndrome (PMDS). In this syndrome, males often have normal external reproductive organs, yet will also develop a uterus and fallopian tubes from a developmental structure known as the Müllerian duct which normally undergoes apoptosis during male development. A genetic mutation in the canine AMHR2 gene has been implicated in one recessively inherited canine form of PMDS described in the miniature schnauzer. A test for this mutation is currently available at PPG for the miniature schnauzer and can identify asymptomatic carriers of the associated genetic mutation.

Chimerism, or a condition in which an organism develops cells of variable genotype, has also been implicated in DSDs. Originally formed by the fusion of a male and female zygote in utero, puppies with both XX and XY chromosomes (depending on the tissue sampled) are at risk of abnormal sexual development including ambiguous genitalia. Similarly, chromosomal number abnormalities (particularly trisomy of the sex chromosomes; e.g. XXY) have also been implicated in various DSDs.

The factors described above are just a few of the potential DSDs seen in dogs. As implied by the breeder during our initial conversation, sometimes, the humans involved in the breeding process might actually play a role in causing disease, despite the best of intentions. The breeder informed me that prior to the current litter, the dam had been unable to carry two litters for their full gestation; suggestive of undiagnosed hypoluteoidism (among other potential causes). Therefore, when a friend of hers (a more experienced breeder) suggested using a well-known synthetic progesterone supplement intended for horses, she thought she may have found a solution for her female to maintain her third pregnancy. The client started Regumate supplementation at day 31 of pregnancy when progesterone levels dipped to 10 ng/ml (dosage was not available at the time of publication) and continued the supplementation daily until a Caesarean section was performed to deliver the puppies. The only other medications or supplements given to the dam were essential fatty acids and vitamin E.

Though it appears to be rare, in 1964, the first case report of masculinization of female puppies due to progestin supplementation was reported in the scientific literature. Though female masculinization was previously reported in other species due to progestin administration, this paper marked the first official report of a similar phenomenon in dogs. In this particular report, progesterone was administered via injection to a pregnant boxer (four weeks after her last mating) in combination with oral administration of between 2.5 mg and 5 mg of norethindrone (another progestin) daily until the 58th day of pregnancy.

Similar to the displacement of the preputial opening seen in the PPG client’s masculinized puppies, the puppies in the case report displayed ventral (and somewhat cranial) displacement of the vaginal opening such that the organs in both cases were located in an intermediate position between the normal locations of the prepuce or vulva. In contrast to the PPG client’s pups, the puppies described in the paper did not develop an obvious penis, but did display abnormal, “redundant” labia that could be stretched “several” centimeters. In addition, though our client’s puppy was found to have underdeveloped uterine and ovarian structures (presumed to be non-functional), the abnormal puppies in the case report were discovered to have normal appearing internal female sexual anatomy and each of the abnormal dogs had at least one recorded normal estrus. Despite the lack of an obvious penis in the case report puppies, the variability in masculinization of dogs exposed to progestins can be wide and may be dictated by background genetics, the dose of progestins administered, and the developmental phases in which the progestins are administered.

Given the history of progestin administration and previous reports of progestin-associated masculinization of female dogs, we suspected that the most likely cause of the sexual dysmorphia seen in the PPG client’s litter was the progesterone supplement itself. However, environmental factors or the background genetics of the mother or puppies could not be ruled out as a potential contributing factor to masculinization.

The case of the PPG client’s masculinized puppies, though relatively rare in the clinical setting, is a great example of a disease etiology likely more based on environmental influences than genetic makeup. Though no specific genetic mutations or haplotypes have been implicated, it is also possible genetics may play a role in a dog’s overall susceptibility to the masculinizing effects of progestins. Though only a small percentage of female puppies go on to develop masculinization due to maternal progesterone supplementation, in this case, it appeared likely that simply removing the progesterone from the equation would have prevented the condition. However, if masculinized female puppies were produced in the future by the same parents in the absence of progesterone supplementation, a more in-depth analysis including genetic examination and histopathology of internal organs would be indicated to help determine a cause. At this time in veterinary medicine, uncovering the cause of DSD can be quite challenging with many cases falling into the “idiopathic” category despite extensive diagnostic workup. However, regardless of whether a definitive cause can be determined, having both inherited and environmental factors in mind during diagnosis may help you give the best possible advice to breeders about future litters while preventing unnecessary removal of breeding dogs from the gene pool.

Why Do My Dog’s B Locus Results Say ‘maybe black or brown’?