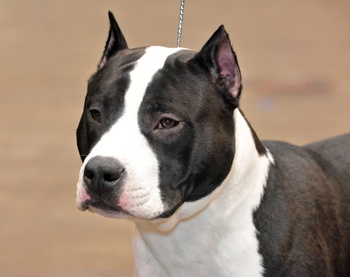 As the AST has progressed as a breed, so has the understanding of the genetics that underlies the breed we see today. In addition, the discovery of particular genetic mutations responsible for causing inherited diseases has allowed for the development of genetic tests to identify nonsymptomatic carriers and young dogs affected with late-onset inherited disorders. Through the genetic knowledge gained by testing potential dams and sires prior to breeding and implementation of informed, selective breeding practices, these diseases can be eliminated from bloodlines over just a couple of generations. One inherited disease of the AST which can now be eliminated in this manner is the disease often referred to by breeders as ataxia or cerebellar ataxia, but known to the veterinary community as neuronal ceroid lipofuscinosis 4A (NCL4A).

NCL4A is an adult-onset, slowly progressive neurological disease caused by a mutation in the canine ARSG gene. NCL4A belongs to a group of diseases known as lysosomal storage diseases. Lysosomes are small structures found inside the cells of most animals that contain a variety of digestive enzymes. Functioning as a microscopic biological recycling center, the enzymes present inside lysosomes play an important role in degrading worn out cellular components, bacteria, viruses, and other biological molecules such as protein, nucleic acids, fats, and carbohydrates. The small molecules left over after degradation can then be reused by the cell to carry out normal processes.

In lysosomal storage diseases such as NCL4A, there is a deficiency in at least one of the many digestive enzymes normally present in the lysosome. In the case of NCL4A, the genetic mutation found in the ARSG gene results in a deficiency of the enzyme known as arylsulfatase G. Deficiency of this enzyme prevents the breakdown of some cellular waste products allowing them to slowly accumulate inside cells (including neurons). Neurons are particularly sensitive to this accumulation resulting in neuronal death and dysfunction. It is this death and dysfunction of neurons which results in the classic clinical signs of NCL4A seen in the AST.

Dogs affected with NCL4A typically begin to show signs of neurological disease around 3 to 5 years of age including lack of muscle coordination, tremors, abnormal eye movement, abnormal gait, poor balance, and difficulty jumping. The severity of these clinical signs progresses until affected dogs lose the ability to walk. Sadly, these dogs are generally euthanized due to quality of life concerns.

NCL4A is inherited in a recessive fashion, meaning that dogs must inherit two copies of the associated mutation (one from each parent) in order to develop disease. Dogs inheriting a single copy of the mutation are considered carriers of NCL4A and do not show clinical signs of the disease themselves, but are at risk of producing affected puppies if bred with another carrier of the same mutation. In order to prevent producing affected puppies, carriers should only be bred to dogs which have not inherited the mutation (“clear” dogs). As with most inherited diseases, it is not generally recommended to breed affected dogs. Since affected dogs do not show clinical signs of NCL4A until long after sexual maturity, genetic testing is crucial for identifying both carriers and young, affected dogs prior to breeding.

Paw Print Genetics offers testing for neuronal ceroid lipofuscinosis 4A and four other genetic diseases of concern in the American Staffordshire terrier. If you have questions about how to eliminate these genetic diseases from your blood line or would like to discuss any other canine genetics concerns, please feel free to contact us at AskUs@pawprintgenetics.com or call and speak to one of our knowledgeable geneticists or veterinarians (509-483-5950).

Prevention is Smart Breeding- Ichthyosis and the Norfolk Terrier