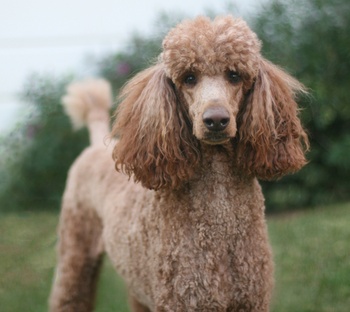 Despite their characterization in popular culture as a gorgeous, yet delicate dog breed with more beauty than brawn, the ancestors of today’s poodles (especially standard poodles) were revered for their ability to work. Still well known for their exceptional intelligence, the standard poodle (the oldest poodle variety), was commonly used as a gun dog and water retriever to assist European hunters. Portrayed in drawings and paintings from as early as the 15th century, the standard poodle was eventually bred to smaller breeds in order to create poodles of smaller size. The resulting smaller dogs, which reportedly disliked water, were used for truffle hunting and formed the ancestry of today’s toy and miniature poodle breeds. Though no longer commonly thought of as gun dogs, interest in using standard poodles as hunting dogs has reemerged with some standard poodles experiencing success in AKC and CKC hunting trials since the mid to late 1990’s. Toy and miniature poodles are most commonly recognized today as family-friendly companion dogs. During their path of development, like other purebred dogs, all three commonly recognized varieties of poodles have developed some inherited diseases that can make life challenging. One particular disease of poodles known as progressive retinal atrophy, progressive rod-cone degeneration (PRA-prcd) is a late-onset inherited cause of blindness that occurs due to a mutation in the canine PRCD gene. However, by using genetic testing and informed, selective breeding it is possible to completely prevent poodles from being born with this condition.

Rather than a single disease, progressive retinal atrophy is a group of similar diseases that are caused by various mutations in multiple genes. Though each form of PRA has a unique genetic cause, age of onset, and speed of progression, the clinical signs and appearance on veterinary eye exam are often very similar. In general, progressive retinal atrophy occurs due to either underdevelopment or degeneration of sensory cells in the retina known as rods and cones that play a crucial role in vision. In the case of PRA-prcd, the cells degenerate, thus resulting in the clinical signs associated with the disease.

As is the case with the majority of progressive retinal atrophy types, in PRA-prcd, the rod cells tend to degenerate first. Since rod cells are important for vision in low light conditions, affected dogs will first present with signs of night blindness, often around 3 to 5 years of age. However, some dogs may not begin showing clinical signs until later. As the disease progresses, cone cells (responsible for vision in normal light conditions) are also affected, resulting in complete blindness.

Since PRA-prcd is a late-onset disease, the disorder is not typically identified in young dogs undergoing eye exam prior to breeding. Therefore, genetic testing of dams and sires is essential in identifying dogs at risk of producing affected puppies. PRA-prcd is inherited in an autosomal recessive fashion meaning that dogs must inherit two copies of the associated PRCD gene mutation (one from each parent) in order to become affected with this disease. Dogs only inheriting a single copy of the mutation are considered carriers of PRA-prcd. Carriers will not show clinical signs of PRA-prcd, but can have affected puppies if bred with another carrier of the same mutation. Carriers can be safely bred do dogs that have not inherited the mutation without fear of producing affected puppies. However, about 50% of the puppies from this breeding would be carriers of the PRCD mutation. As with all inherited diseases, breeding of affected dogs is not recommended.

Paw Print Genetics offers testing for PRA-prcd in toy, miniature, and standard poodles as well as testing for a variety of other inherited diseases found in these breeds. If you have questions about how these inherited diseases can be eliminated from your breeding program or have general canine genetics questions, please contact us at AskUs@pawprintgenetics.com or call 509-483-5950 to chat with one of our friendly, knowledgeable staff members.

The Path to Independence from Canine Inherited Diseases