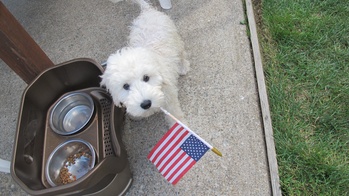 The art of medicine today is nearly unrecognizable from its state in 1776 when the original thirteen colonies of the United States declared their independence from Great Britain. Without knowledge of bacteria or viruses, physicians and veterinarians of the day had few worries about sterility or the fact that they could play a role in the spread of deadly diseases between their patients. Bolstered by anecdotal evidence, dangerous treatments to purge various ailments from the body such as bloodletting and enemas (then called clysters) were commonly practiced in both people and animals in opposition to our modern understanding of their risks and lack of efficacy.

The Birth of Modern Genetics

The 19th century saw great advances in science including progression of the scientific method by which scientists could more objectively test their observations and develop an explanation for them. These methods also allowed for the modification of previous theories as new information was uncovered through experimentation. It was also the 19th century in which the foundation for the modern era of genetics was laid by an Augustinian friar named Gregor Mendel. Far ahead of his time, Mendel’s study of trait inheritance in the common pea plant went relatively unnoticed until the 20th century when scientists studying the same principles rediscovered his work. Great strides in genetics continued throughout the 20th century including the discovery of DNA’s three dimensional structure. All of these advances culminated in the year 2003 when the Human Genome Project was completed, thus resulting in the complete mapping of the human genome. Shortly after the mapping of the human genome, in 2005, the entire canine genome was also mapped thanks to the Dog Genome Project.

Genome mapping, as occurred in the Dog Genome Project, gives scientists a genetic template to compare genomes of apparently healthy individuals to those suffering from inherited diseases in an effort to identify the specific genetic mutations responsible for disease. Once these mutations are known, techniques can be developed to diagnose these conditions through genetic testing. These technologies have revolutionized domestic dog breeding by helping breeders eliminate or greatly decrease the incidence of many canine inherited diseases that once plagued their blood lines.

According to the Online Medelian Inheritance of Animals (OMIA), as of this writing there are 193 known single gene genetic mutations responsible for a wide variety of canine genetic diseases and traits. While this number is miniscule in comparison to the known disease and trait associated mutations of humans, some of the canine mutation discoveries have proven invaluable for dog breeders. For instance, the discovery of a mutation in the canine SOD1 gene responsible for causing a late-onset, neurological disease known as degenerative myelopathy (the canine equivalent to Lou Gehrig’s disease) has allowed dog breeders to prevent this condition which results in progressive paralysis (invariably ending in death or euthanasia) in over 100 breeds of dog.

Most importantly, genetic testing allows for identification of dogs with late-onset diseases prior to breeding that have not yet shown clinical signs and dogs which are considered carriers of certain conditions, but do not show signs of the disease themselves. Armed with genetic test results and knowledge of how a particular disease is inherited, breeders can make informed selective breeding decisions about which mates to breed together in order to prevent producing puppies with the disease in question; thereby allowing for complete elimination of a particular mutation from a kennel over just a few generations.

Though the benefits of performing genetic testing of breeding dogs are many in regards to controlling inherited disease, genetic testing is not without its challenges. One particular concern is that elimination of dogs with certain genetic mutations from breeding programs may drastically reduce genetic variability with a breed. This is concerning because closely related dogs are more likely to share the same disease causing genetic mutations. Since recessive genetic diseases require that an individual inherit a copy of the disease associated mutation from each parent, closely related breeding pairs are more likely to produce puppies with recessive diseases. However, this loss of genetic diversity can be somewhat ameliorated by only removing dogs affected with inherited diseases from breeding programs. Dogs only carrying a single copy of a recessive disease causing mutation can still be bred to a dog that did not inherit the same mutation without fear of producing puppies affected with that disease. Then by testing the puppies, a breeder can choose only clear (or normal) dogs for future breeding.

In dog breeds with particularly small populations, low genetic diversity, and/or high incidence of a particular inherited disease, it may be necessary to breed affected dogs in order to prevent genetic bottlenecks that may result in more substantial genetic problems for the population. As long as affected dogs are only bred to dogs free of the same disease causing recessive mutations, non-symptomatic carriers will be produced 100% of the time. While it does not improve the breed overall due to the presence of the disease causing mutation in every puppy, if these carriers are then bred to dogs without the mutation to produce the next generation, 50% of the next generation puppies would be free of the mutation. Thus, creating a population of dogs that can be used as future breeding pairs. As more genetic disease associated mutations are discovered, the task of mate selection is bound to become more complex. Though in some respects, the difficult interpretation of large volumes of genetic information is a good problem to have, new methods of mate selection involving statistical analysis may need to be developed to maximize genetic health without limiting genetic variability.

This 4th of July, like every Independence Day, as all of us at Paw Print Genetics are celebrating our country’s freedom and victories over the Redcoats of yesteryear, we can’t help but also light a firework in celebration of all of the puppies that get to claim their independence from inherited disease thanks to the genetic testing services that we provide. We love what we do at Paw Print Genetics and to our great satisfaction, the multitude of complementary emails and reviews we receive from our clients suggest that they do to. Thank you from all of us at Paw Print Genetics! We hope that you and your dogs have a fun, safe, and firework phobia-free Independence Day!