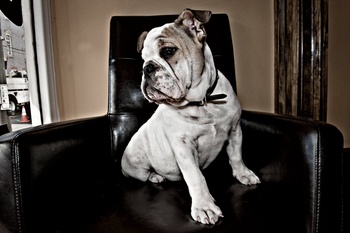 Though the cruel bull-baiting practices for which the ancestors of bulldogs were used have long passed, the enthusiasm for the modern bulldog as a friendly companion animal is as fervent and robust as ever. Ranked the 4th most registered dog in the AKC, it’s no secret to most that the bulldog has established itself as one of America’s favorite canines. Through selective breeding practices, the previously fierce and aggressive bulldog of old has given way to a gentle, even tempered, yet strong willed breed with copious amounts of character; in both temperament and physical attributes. Unfortunately, like other purebred dogs, during the course of breed development, some inherited genetic diseases have come to light that can make life difficult for bulldogs and those that love them. Luckily, through the use of genetic testing technologies and selective breeding, some of these inherited diseases can be completely eliminated (or greatly reduced in frequency) from blood lines. One example of an inherited disease that can now be prevented in the bulldog is an inherited form of urinary stones known as hyperuricosuria (HUU), caused by a genetic mutation in the SLC2A9 gene.

Dogs affected with HUU lack a protein which plays an important role in the kidney’s function to reabsorb excessive uric acid (a waste product of protein metabolism) from the urine. As a result, uric acid concentrations in the urine are greatly increased from normal in affected dogs. Increased uric acid concentrations in the urine predispose dogs to the development of urate (uric acid salt) crystals or stones in the urinary tract. Though it is most common for urate stones to form in the bladder, some dogs will also develop stones in the kidneys where they can cause chronic damage. Clinical signs of urinary stones (if present) are generally similar regardless of the mineral type and are often confused with signs of urinary tract infections; frequent urination of small volumes, straining to urinate, and blood in the urine. In some circumstances urinary tract infections may also be present, thus increasing the severity of these signs. Rare cases of stones becoming lodged in the ureters of dogs resulting in renal failure have also been reported.

The most urgent complication of urinary stones are urinary obstructions where stones become lodged in the urethra, thus blocking urine flow out of the body. The inability to urinate results in a potentially lethal buildup of waste products in the blood, including the mineral potassium, which is responsible for cardiac arrest at severely elevated blood levels. Dogs with a urinary obstruction will show a variety of clinical signs including distress, anorexia, lethargy, vomiting, abdominal pain, and straining to urinate. Male dogs are at increased risk of urinary obstruction due to their longer and narrower urethra. However, female dogs with urinary obstructions have also been reported. In either case, an inability to urinate should always be considered an emergency requiring immediate veterinary intervention to prevent death.

Interestingly, not all dogs that have elevated levels of uric acid in their urine will form stones. However, the factors providing a protective effect against stone formation are unknown. Feeding of specially formulated, low-protein prescription diets can help decrease uric acid concentrations in the urine. However, there is no cure for hyperuricosuria and some dogs will still develop stones despite a modified diet. Therefore, the best medicine is to prevent hyperuricosuria before it ever happens by performing genetic testing on breeding dogs and using informed selective breeding to select compatible mates.

How is HUU Inherited?

HUU is inherited in a recessive fashion meaning that dogs must inherit two copies of the SLC2A9 gene mutation (one from each parent) in order to develop the disease. Dogs inheriting a single copy from one of their parents are considered carriers of HUU and will not develop disease themselves. However, carriers can have affected puppies if bred with another carrier of the same mutation. In order to avoid producing affected puppies, carriers should only be bred with dogs that have not inherited the SLC2A9 mutation. As with all inherited diseases, it is not recommended to breed affected dogs. Keep in mind that there are other types of inherited urinary stones caused by undiscovered mutations. Therefore, ruling out hyperuricosuria associated with the SLC2A9 mutation does not rule out ALL causes of urinary stones in the bulldog.

Paw Print Genetics offers testing for HUU as well as 2 other inherited diseases reported to affect bulldogs. HUU caused by the SLC2A9 mutation is known to affect over a dozen breeds of dog. If you have questions about HUU in your blood line or have general questions about canine genetics, please contact us at AskUs@pawprintgenetics.com or call our knowledgeable staff at 509-483-5950.