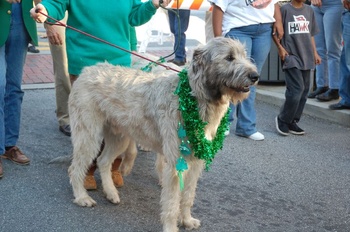 It’s the time of year to break out your green attire, shine up your Claddagh ring, and water your shamrocks because St. Patrick’s Day is upon us! In the spirit of this traditional Irish holiday, it is also time to take a look at some of the dog breeds that the people of Ireland have so graciously developed for the rest of the world’s dog lovers to appreciate. In addition, we will also take a look at some of the inherited diseases reported to affect these breeds and the genetic tests available through Paw Print Genetics. Through the implementation of genetic testing and selective breeding, these diseases can be completely eliminated from any dog breeding program.

One breed with its roots firmly planted in Irish soil is the Irish wolfhound. One of the most ancient and arguably the most visually striking dog breed of Irish origin, the Irish wolfhound, was originally developed as a fierce hunting companion, military dog, and guard dog. However, the temperament of the modern wolfhound bares little resemblance to ancient descriptions of the ferocious canines known for their selfless bravery in battle. Now much more known for their quiet, confident, and introverted demeanor, there are few dog breeds that command as much attention in a crowd as the Irish wolfhound. Though potentially confused with the similar looking Scottish deerhound, their large size and long, wiry hair coat set them apart from nearly every other pure breed out there. While still willing to protect their loved ones if necessary, it’s more likely to find an Irish wolfhound quietly enjoying the attention of its human family than searching for prey or an enemy to conquer. Unfortunately, despite the “luck of the Irish”, wolfhounds aren’t immune to the threat of inherited genetic diseases.. Paw Print Genetics offers testing for two inherited diseases reported in the Irish wolfhound; degenerative myelopathy and a disease unique to the Irish wolfhound known as startle disease.

The Irish setter and its abilities as a gun dog made the breed particularly popular in 18th century Ireland. Though not originally a solid red hue as seen in most modern Irish setters, the early Irish setter would have been closer in appearance to the modern (and less popular) Irish red and white setter. In the 19th century, the red and white variety of setter lost popularity with dog owners in favor of the solid red color seen today. Despite their continued popularity in the show ring and former dominance as a gun dog, by the mid-1900’s the popularity of the Irish setter as a hunting companion had waned significantly. In a controversial effort to preserve and improve the field varieties of Irish setter, the breed was outcrossed to red and white English setters resulting in a field variety of setter now known as the red setter. Despite their slightly different breed background, the red setter is still currently registered as an Irish setter in the AKC. Like the Irish wolfhound, during the lengthy development of the modern day Irish setter, a few inherited conditions have come to the attention of breeders and owners alike. Paw Print Genetics offers testing for 5 inherited diseases reported in the Irish Setter and its close relative, the Irish red and white setter; degenerative myelopathy, globoid cell leukodystrophy, leukocyte adhesion deficiency type I, progressive retinal atrophy (Irish setter type; rod-cone dysplasia 1), and von Willebrand disease I.

The early history of the Kerry beagle, though known to originate in Ireland, has been mostly lost to time. Originally developed as a stag-hound for hunting larger mammals, the ancient and rare Kerry beagle is today used as a hunting companion in the pursuit of foxes and other small game. There is no FCI recognized breed standard for the small, worldwide Kerry beagle population.  Paw Print Genetics does not currently offer genetic disease tests for the Kerry beagle.

In the second part of this two part series on Irish dog breeds, we will take a look at four breeds of terriers developed in Ireland and the genetic testing available at Paw Print Genetics for these breeds.