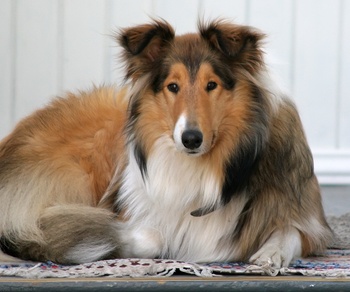 In 1953, a prevalent inherited eye condition of collies was first described by W.G. Magrane in a journal article entitled, “Congenital anomaly of the optic nerve in collies”1. Later termed choroidal hypoplasia by scientists, the disease now known to the general public as collie eye anomaly (CEA) has significantly troubled collie breeders for over 50 years. In 2007, a paper describing a specific genetic mutation of the NHEJ1 gene associated with CEA was published. Identification of this mutation, has made it possible for scientists to develop tests that predictably identify the mutation and subsequently help breeders avoid producing puppies with CEA. Despite its breed specific name, testing has since identified the same CEA associated mutation in several other dog breeds including the Australian shepherd and the Shetland sheepdog.

Though there is significant variability in terms of ocular defects seen in affected dogs, the fundamental characteristics of CEA stem from the malformation of an important structure of the eye known as the choroid. The choroid is a thin layer of tissue containing the blood vessels responsible for supplying blood and nutrients to the retina and other structures of the eye. While mildly affected dogs may maintain normal vision with only mild changes to the choroid, severely affected dogs can suffer from clinical signs including retinal detachment, malformation of the optic nerve, small underdeveloped eyes (microphthalmia), and ultimately, blindness.

Through my conversations with breeders over the past two years, I have discovered that one interesting aspect of CEA causes significant confusion in regards to its inheritance and proper breeding practices to eliminate the condition from blood lines. This confusion stems from documented cases of dogs proven to be genetically affected with CEA that display a phenomenon breeders often refer to as “going normal”. “Going normal” refers to puppies younger than 12 weeks of age that display obvious clinical abnormalities of the choroid and retina on eye exam that resolve after 12 weeks old. To complicate matters further, these dogs rarely show obvious signs of vision deficits, making them look even more normal. In actuality, these dogs are not normal at the microscopic level and can lead to major headaches for breeders if they choose to breed them.

CEA is inherited in an autosomal recessive fashion with variable expressivity meaning that dogs must inherit two copies of the associated NHEJ1 gene mutation (one from each parent) in order to develop the disease. However, “variable expressivity” means that the severity of CEA in affected dogs may vary significantly from dog to dog. Therefore, mildly affected parents can produce severely affected puppies and vice versa. On top of that, dogs that only inherit one copy of the associated mutation do not show clinical signs of CEA, but are considered carriers of the disease and can have CEA affected puppies if bred to another CEA carrier or affected dog. Therefore, genetic testing of dams and sires is absolutely critical for eliminating this disease from a blood line. In order to avoid producing affected puppies, all carriers of the NHEJ1 mutation should be bred to dogs that have not inherited the mutation. This pairing will not result in any affected dogs, but it should be noted that about 50% of the litter would still be carriers of the mutation. As with any inherited disease, it is not recommended to breed affected dogs; this is true even if the dog you’d like to breed has “gone normal” due to the aforementioned inability to predict disease severity.

Published estimates looking at the percentage of CEA affected collies in the US and Great Britain populations have been as high as 97%. Though it is likely that the current prevalence of CEA affected collies is significantly lower since the introduction of DNA testing, it is still commonly seen in the breed. Paw Print Genetics currently offers testing for CEA in both rough and smooth collies as well as 14 other breeds. If you’d like to ask some questions about how to eliminate CEA from your kennel or what CEA testing might mean for your dog, feel free to email us at AskUs@pawprintgenetics.com or give us a call at 509-483-5950 to talk with our friendly staff.

Myotonia Congenita: A Preventable Inherited Disease of the Miniature Schnauzer