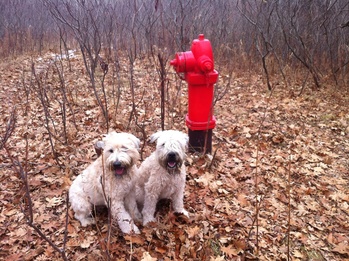 In the spirit of the impending annual homage to one of the most widely recognized patron saints of Ireland, St. Patrick, we are taking a look at the wonderful dog breeds of Irish origin and some of the inherited diseases that are reported to affect them. In part one, we discussed dogs developed in Ireland that fall outside the terrier group such as the Irish wolfhound and the Irish setter. In this second blog of the two blog series, we will discuss four terrier breeds gifted from the Emerald Isle to the rest of the world for dog lovers to enjoy!

Like many terrier breeds, the origins of the Irish-bred Kerry blue terrier are closely linked to their abilities in controlling a variety of vermin nuisances. Though not a particularly popular breed in the US (most recently ranked 128th based upon their AKC registration statistics), the Kerry blue is easily recognizable by their characteristic progressive gray (“blue”) wavy to curly coat. Born black, this attractive breed slowly develops their characteristic gray/blue color over their first 2 years of life in a process referred to by breeders as “clearing”. Though variability exists in regards to the speed by which individual dogs make this color transition, those still displaying black coloration on the body after 18 months of age are not permissible in the show ring (black on the muzzle, head, ears, tail, and feet is allowed according to the breed standard). Though early Kerry blue terriers selected for breeding were chosen for their tenacity and aggressiveness making them good hunters, modern breeding efforts have attempted to maintain the high energy of the breed while decreasing aggressive tendencies.

One of the oldest terrier breeds, the Irish terrier was very popular in 19th century Ireland as a talented vermin hunter originally bred more for their hunting abilities than their appearance. The personality of the Irish terrier has also proven effective in modern agility and obedience competitions. Though originally found in many colors, current color standards for the Irish terrier range from solid wheaten (yellow-beige) to bright red coloration with only a small amount of white on the chest permissible in the show ring. Though still very content as a ratter, their independent and head strong demeanor can be tempered for family living through early socialization, but does best with access to frequent exercise and mental stimulation.

Paw Print Genetics currently offers a test for the Irish terrier to identify the mutation responsible for the late-onset neurological disease known as degenerative myelopathy.

The most popular of the Irish terriers in the US, the soft-coated wheaten terrier was originally described over 200 years ago in Ireland. However, the breed has only been officially recognized by the Irish Kennel Club since 1937 and by the American Kennel Club since 1973. The soft-coated wheaten terrier was originally bred as a well-rounded farm dog capable of a variety of jobs including guarding, herding, and of course, hunting rodents and other small vermin. Two general hair coat types are recognized in the breed; Irish type and American (or North American) type. The Irish type coat is described as silky, thinner, and glossier in character than the American type coat. Though darker when the puppy is born, the Irish coat is frequently of lighter color when fully mature than the American type. In addition, the Irish coat will slowly develop over the early years of the dog’s life before reaching its final appearance while the American coat tends to be full at an early age. Sometimes described as having a “teddy bear” quality, the American coat also tends to require higher maintenance in regards to grooming. Though not typically as active as its cousins, the Kerry blue and Irish terriers, soft-coated wheatens will thrive in an environment with access to daily walking.

Named for a remote valley in eastern Ireland, the Glen of Imaal terrier is the rarest of the Irish-bred terriers in the US. A short-legged, working terrier, their low stature and bowed front legs are said to keep them close to their prey and to improve their ability to dig while carrying out their instinctual desire to hunt a variety of vermin, foxes, and badgers. They are the only short-legged terrier native to Ireland. Unlike some of the other terrier breeds, Glens tend to be less likely to bark and were often bred to be silent while working. Like most terriers, their drive to chase prey is highly instinctual. Like other terrier breeds, households with both Glens and other small mammals would be best served by early introduction, socialization, supervision, and correction as necessary to decrease the expression of this instinct in the home.

While generally a very healthy breed, Paw Print Genetics offers testing for a type of late-onset progressive retinal atrophy known as cone-rod dystrophy 3 which is unique to the Glen of Imaal terrier.

In celebration of this St. Patrick’s Day, all of us at Paw Print Genetics would like to thank the dog fanciers of Ireland that helped develop such wonderful dog breeds to share with the world. If you have questions about your Irish dog breed’s potential to inherit disease or would like to discuss how genetic testing can improve your breeding program, feel free to contact us at AskUs@pawprintgenetics.com or call us at 509-483-5950 to speak with our knowledgeable staff.

Degenerative Myelopathy and Centronuclear Myopathy in the Labrador Retriever