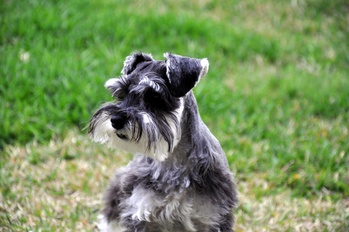 From their origins in Germany, the miniature schnauzer and its entertaining, high-spirited personality have endeared them to people all over the world. Originally bred to be an effective, small breed vermin hunter, it is believed that the miniature schnauzer was the product of breeding small breeds like the affenpincher and small poodles with the standard schnauzer. First recognized as an independent breed in the late 19th century, miniature schnauzers have since firmly planted themselves as popular, devoted family members and guard dogs. In 2013, they were ranked 17th in the AKC registration statistics; an indication of their significant popularity in the US. Unfortunately, like other purebred dogs, the miniature schnauzer is reported to inherit some genetic diseases that can prevent them from being the spunky terrier they are otherwise known to be. One such condition is an inherited muscular disease known as myotonia congenita (MC).

MC is a disorder of skeletal muscle caused by a mutation of the CLCN1 gene in which muscles display hyperexcitability and delayed relaxation after contracting. Affected puppies are usually identified when they begin walking due to the presence of a stiff gait resulting in frequent falls. Though the episodes of muscle stiffness do not appear painful, affected dogs often have difficulty rising from a prone position and will frequently display a “bunny hopping” gait when running. However, muscle stiffness tends to decrease with continued exercise. The muscles of affected dogs are enlarged (muscular hypertrophy) due to the frequent, sustained contractions they experience. Difficulty swallowing is common with MC which can make affected dogs appear as if they are salivating excessively. During activity, affected dogs commonly make audible, high-pitched wheezing or snorting respiratory sounds. Affected dogs also frequently display a characteristic shortening of the lower jaw resulting in a significant overbite.

MC is a recessive genetic disease meaning that a dog must inherit two copies of the associated CLCN1 gene mutation (one from each parent) in order to develop clinical signs. Dogs inheriting only one copy of the mutation do not show clinical signs, but are considered carriers of MC and can produce affected puppies if bred with another carrier of the same mutation. To avoid producing affected puppies, carriers of the MC mutation should only be bred to dogs that have not inherited the mutation (“clear” dogs). However, about 50% of these puppies will be born as carriers of MC. As with all inherited diseases, it is not recommended to breed MC affected dogs.

Paw Print Genetics offers testing for MC and two other diseases reported in the miniature schnauzer. If you’d like to learn more about how you can eliminate MC from your kennel blood line or would like to discuss genetic testing of your dog, feel free to email us at AskUs@pawprintgenetics.com or give us a call at 509-483-5950 to talk to one of our helpful staff members!

Rickie Roo to Compete at Westminster