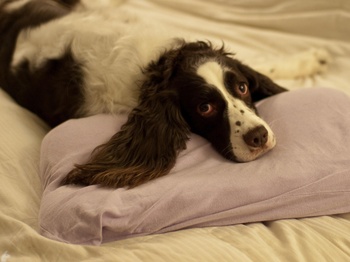 The intelligent, prey-driven English springer spaniel (ESS) has forged its path as a popular, hardworking companion for bird hunters while maintaining a loyal and affectionate personality suitable to family life. Until the early 1900’s, springer spaniels were produced in the same litters as cocker spaniels; springers were chosen from the largest puppies of the litter and were trained for flushing or “springing” game while the smaller littermates were labeled cocker spaniels and were trained for hunting the elusive woodcock. Since then, springer spaniels have been further split into the generally leaner, shorter haired field (hunting) variety and the denser boned, densely haired show (“bench”) line. Unfortunately, like other purebred dogs, English springer spaniels are known to inherit genetic diseases that can keep some individuals from reaching the great potentials for which the breed is capable. One such inherited condition is an eye disease known as progressive retinal atrophy, cone-rod dystrophy 4 (PRA-crd4) caused by a mutation in the RPGRIP1 gene.

Progressive retinal atrophy (PRA) is not a single disease, but rather a group of inherited diseases each caused by different genetic mutations in different genes. The various forms of PRA affect over 100 different dog breeds. Though there are variations in the progression of disease, most varieties of PRA (regardless of genetic cause) result in blindness due to an inherited degeneration of the retina; more specifically, the degeneration of retinal cells known as rods and cones, which play an important role in vision.

PRA-crd4 is inherited in a recessive fashion meaning that a dog must inherit two copies of the mutation (one from each parent) in order to develop disease. Though some dogs are diagnosed with clinical PRA-crd4 before two years of age, others may not be diagnosed until 10 years old or later. In addition, the PRA-crd4 mutation shows incomplete penetrance, meaning that not all dogs (but most) that inherit two copies of the mutation will become blind. The wide variability in age of disease onset and lack of complete penetrance of the clinical features complicates diagnosis and healthy breeding. To prevent transmission of PRA-crd4, it is crucial to test dams and sires prior to breeding to identify disease carriers (dogs with only one copy of the mutation that never show clinical signs) and “affected” dogs that are not yet blind. Carriers of the mutation can safely be bred with dogs that are free of the mutation without fear of producing affected puppies. However, breeding carrier dogs will not reduce the frequency of the mutation in the breeding stock. In addition, breeding affected dogs (whether showing clinical signs or not) is not recommended, as all pups would inherit the mutation.

Though both the field and show varieties of ESS are known to inherit the mutation associated with PRA-crd4, the show varieties are believed to be at higher risk. Since very little interbreeding has occurred between the two varieties over the past 70 years, it is likely that the original PRA-crd4 causing mutation occurred in a common ancestor to both breed varieties. Interestingly, the same PRA-crd4 mutation found in the ESS has also been identified in the beagle, Chihuahua, field spaniel, French bulldog, Labrador retriever, miniature longhaired dachshund, miniature smooth dachshund, and miniature wirehaired dachshund.

The AKC parent club of the English springer spaniel requires genetic testing for PRA-crd4. In addition to PRA-crd4, the club also recommends genetic testing for glycogen storage disease VII (also known as phosphofructokinase deficiency or PFD)and degenerative myelopathy, two other important inherited disease concerns of ESS lovers. Paw Print Genetics offers tests for all three of these ESS health concerns in addition to testing for an inherited kidney disease of the ESS known as familial nephropathy. If you have questions about how Paw Print Genetics can help increase the health and value of your breeding program or simply help you understand the genetics of your canine companion, please contact us at AskUs@pawprintgenetics.com or call our friendly, customer-focused staff at (509) 483-5950.

Does the same mutation always cause disease?

Thrombopathia: A Preventable Inherited Disease of the Basset Hound