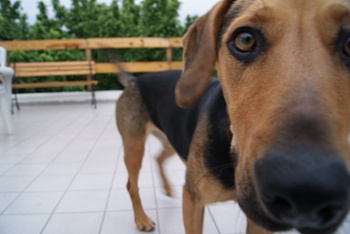 Paw Print Genetics is often asked if the same mutation always causes genetic disease, especially when the mutation is identified in a breed different from that originally investigated.  The answer is not simple.  For many of these types of genetic questions, I go back to my ‘human’ roots as a human geneticist.  Because more than 4,500 diseases and their genetic causes are known, human genetics can shed considerable light on problems just beginning to be investigated in dogs.

Currently, there are about 185 known mutations in dogs, with about 150 that cause disease and another 30 or so that cause traits such as coat color or coat length.  In dogs, these disease-causing mutations have been narrowly defined to certain breeds or certain clinical features (phenotypes), but is this always the case?

One mutation = one disease

More than one mutation in the same gene = one disease

More than one mutation in different genes = one disease

One mutation = more than one disease

Why can’t this occur in dogs?  I believe that it does, but dogs have not been studied to the extent that humans have. Humans have the luxury of being seen by a dysmorphologist, a geneticist highly skilled in identifying variation among humans and among individuals with the same disease or thought to have the same disease.

With advances in laboratory methods, such as sequencing DNA, new mutations are being uncovered in humans at an unprecedented pace. Never before in history have so many discoveries occurred in human genetics. It is nearly impossible to keep up with the medical literature, publishing new mutations almost daily.

Wouldn’t it be wonderful if the canine field was progressing at the same rate?  It’s starting to.  At the recent American Society of Human Genetics, there were several presentations on new mutations and disease discovery in dogs. Presenting the researchers’ findings at these scientific meetings is very important for the canine world and allows laboratories to develop diagnostic tests so that breeders and owners can screen their dogs for these diseases. Paw Print Genetics is committed to research and would like to hear from you if your breed has a genetic disease that might make a good research project. Just email us at AskUs@pawprintgenetics.com with your idea.

Stupid Human Tricks. How Well Does Your Dog Have You Trained?