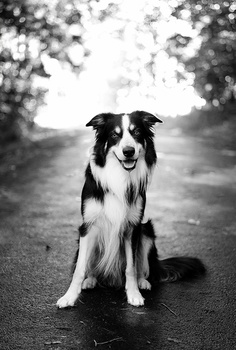 If you are a dog owner that values intelligence and obedience above all else when choosing a dog, it’s likely you are familiar with the border collie. This hardworking canine breed who received its name from its likely place of origin along the border of England and Scotland, has historically been bred for working ability above all and is widely regarded as one of the most intelligent breeds in the world. Though generally considered a relatively healthy breed, like other purebred dog breeds, the border collie is known to inherit several genetic diseases; some of which are known to be caused by specific genetic mutations. Discovery of the specific mutations responsible for genetic diseases allow laboratories like Paw Print Genetics to develop tests to identify dogs that carry the mutation. This information allows breeders to selectively breed these carrier dogs to dogs that are clear of the mutation in order to avoid producing puppies with these diseases. Three specific inherited diseases are listed on the Canine Health Information Center (CHIC) website as optional recommended tests for the border collie. Testing for these diseases is available from Paw Print Genetics:

One of the biggest inherited disease concerns for border collie breeders is a condition known as collie eye anomaly (CEA). The clinical signs of this disease can range from very mild to severe. In mild cases, dogs may show signs of eye disease on ophthalmologic exam, but have clinically normal vision. Severely affected dogs can have retinal detachments, malformation of the eye, and blindness. Unfortunately it is not possible to predict the severity of clinical signs based upon the severity of an affected parent. Some mildly affected parents will give birth to severely affected puppies and vice versa. On one independent test results database, Border Collie Health, 900 out of 3592 (25.1%) border collies from 29 different countries were reported as carriers of CEA and 30 (0.8%) were affected. Previously reported estimates have stated that approximately 1 to 3% of border collies are believed to be affected with this disorder.

Another important disease for border collie breeders to be familiar with is the neurological disorder known as neuronal ceroid lipofuscinosis 5 (NCL5). Affected dogs lack a particular enzyme important for cellular metabolism leading to an abnormal accumulation of cellular waste product in cells (particularly those of the nervous system) causing disruption of normal cellular function. Dogs affected with this disorder present around 15 to 20 months of age with neurological clinical signs such as behavioral changes, disorientation, aggression, and irrational fears progressing to severe signs such as blindness, abnormal gait, seizures, and difficulty with balance. Most affected dogs die or are euthanized by 3 years of age due to progressive neurological disease. The Border Collie Health database lists that 42 out of 1713 (2.5%) border collies tested were carriers of this disease and none reported on were affected. In addition, one study examining a random sample of Japanese border collies identified that 33 out of 407 (8.1%) dogs tested were carriers of the mutation.

The third disease test listed as an optional recommended test on the CHIC website is for trapped neutrophil syndrome (TNS). Though the difference in disease incidence between border collie varieties is not well understood for most inherited diseases, it is well known that the TNS mutation can be found in both working and show border collies. This disease of the immune system prevents affected dogs from producing an adequate amount of neutrophils (a type of white blood cell) resulting in an inability to properly fight infections. Affected dogs most commonly present between 6 and 12 weeks of age with a variety of possible infections, learning disabilities, and an overall inability of the puppy to thrive, though some individuals won’t be recognized until they experience a bad reaction with their first vaccination. In rare cases, clinical signs are mild and dogs do not present with disease until 2 years of age or older. In general, affected dogs show signs of poor growth, skin infection, weight loss, diarrhea, and/or vomiting (or other signs dependent upon the specific infections of the individual). Severely affected dogs may also have a narrow, elongated head often described by breeders as “ferret-like”. The Border Collie Health database lists that 409 out of 1808 (22.6%) were carriers of the mutation and 16 (0.9%) were affected. One study of 2094 border collies from 9 different countries (including the U.S.) identified that 271 (12.9%) were carriers of the causal mutation.

Intestinal cobalamin malabsorption is an inherited disease marked by the inability to produce adequate amounts of a protein that plays an essential role in absorption of certain nutrients (including the B vitamin, cobalamin) from the intestinal tract and the kidneys. As a sign of cobalamin deficiency, affected dogs can have high concentrations of an acid known as methylmalonic acid in their urine as early as 14 weeks of age. However, in some circumstances, signs of the disease to go unnoticed by owners for months or years. With time, affected dogs often show signs of anorexia, intermittent diarrhea, lethargy, poor weight gain, poor muscle mass, and anemia. In some rare circumstances, dogs can also show severe signs of neurological dysfunction including altered mental state, seizures, coma and death. Affected dogs require cobalamin supplementation for life, but have an excellent prognosis as long as permanent brain damage has not occurred due to cobalamin deficiency. In one study, 6.3% of 95 border collies tested were carriers of the causal mutation.

Though not nearly as prevalent in the border collie as in other herding breeds, multidrug resistance 1 is a concern in lines around the world, including some in the US. Affected dogs only suffer consequences related to this condition when administered certain drugs. Though the anti-parasitic drug, ivermectin has been the historical concern, many other drugs have now been shown to cause severe problems for affected dogs as well. These dogs lack adequate function of a protein known as P-glycoprotein which is responsible for pumping certain drugs out of the central nervous system. When these drugs are given to affected dogs at normal canine dosages, toxic levels accumulate in the central nervous system resulting in signs of severe neurologic dysfunction including tremors, excessive salivation, anorexia, blindness, seizures, coma, and death. The percentage of dogs carrying the causal mutation varies from 0% to 5% worldwide and in one study of dogs from North America, 1.3% of 306 border collies were carriers of the mutation.

Degenerative myelopathy is a late-onset neurological disease caused by a mutation of ancient origin that has been discovered in over 100 breeds of dog, including the border collie, and bears a close resemblance to amyotrophic lateral sclerosis (“Lou Gehrig’s Disease) of people. Affected dogs typically begin to show signs of neurological weakness in the hind limbs around 7-10 years of age. The disease progresses to involve the front limbs and dogs typically lose the ability to walk 6 months to 2 years after first clinical signs are noticed. In addition, affected dogs often suffer from fecal and urinary incontinence in late stages of disease. In one study, 8.8% of 80 border collies were carriers of the causal mutation.

All of the diseases listed in this document are inherited in a recessive fashion meaning that affected dogs must inherit one copy of the causal mutation from each parent in order to develop the disease.  Another disease that is found in border collies is primary lens luxation (PLL). Although this is also inherited in an autosomal recessive fashion, in some breeds, one copy of the mutation can also put a dog at risk for lens dislocation.  The frequency of PLL in the border collie has not been studied.

Unfortunately, there are still a number of border collie diseases with a suspected inherited component in which the causal mutations have not been found. These diseases include border collie collapse, hip dysplasia, cerebellar abiotrophy, a variety of cancers, adult onset deafness, and sensory neuropathy. It is our hope at Paw Print Genetics, that the mutations associated with these diseases will be discovered soon so we can begin helping breeders eliminate these diseases from their blood lines!

Genetic testing of border collie dams and sires prior to breeding will help this brainy dog breed become as well known for their health as they are for their intelligence. With our mutual passion for dogs and those that love them, Paw Print Genetics is here to help protect the financial and emotional investment you make for your canine family members!

Inherited Diseases of the Beagle