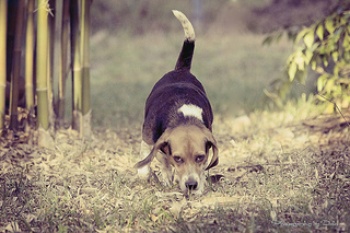 It’s easy to see why the beagle has been ranked near the top of AKC registered dog breeds since their acceptance in to the AKC registry in 1885.  Their amiable personality, fantastic sense of smell, and natural talent as a hunter and guard dog have kept them popular with American dog lovers for the past 130 years. Unfortunately, like most popular, purebred dog breeds, particular inherited diseases can make life tough for some beagle blood lines. Luckily, the genetic cause of some of the beagle’s known inherited diseases have been discovered. Thus, allowing laboratories such as Paw Print Genetics to develop genetic tests that allow for the elimination of these disorders through informed selective breeding. The following genetic tests are available at Paw Print Genetics:

One of the largest inherited disease concerns for beagle breeders is a disease known as Musladin-Lueke Syndrome (MLS). MLS is listed on the Canine Health Information Center (CHIC) as a required test for the beagle and is typically identified in affected puppies by 2 to 3 weeks of age. MLS is a connective tissue disease that causes stiff, contracted joints, and inelastic skin giving affected dogs a characteristic tip-toe walk described as a “ballerina walk”. Many dogs also display cardiac or neurological abnormalities, creased ears, short outer toes, and broad flat foreheads with wide set slanted eyes and high-set ears. Seizures and “phantom pains” have been reported in affected dogs. The incidence of this disease in the general beagle population is unknown.

Neonatal cerebellar cortical degeneration (NCCD) or “tumbling puppy syndrome” is an inherited neurologic disease affecting beagles. Signs of NCCD can present as early as 3 weeks of age when normal puppies are developing coordinated movement. Affected dogs show classic signs of cerebellar brain dysfunction including poor balance, jerky movements, and ataxia due to an inherited degeneration of the cerebellum, a part of the brain important for motor skills. Disease progression is relatively slow, but affected puppies are often euthanized due to poor quality of life. The incidence of this disease in the general beagle population is unknown.

Degenerative myelopathy is a disease closely resembling amyotrophic lateral sclerosis (“Lou Gehrig’s disease”) of humans. Affected dogs typically present at around 8-10 years of age with hind limb weakness that progresses toward the front limbs, leading to urinary and fecal incontinence and the eventual inability to walk within 6 months to 2 years after first clinical signs. Given its late age of onset, affected dogs are often bred and have produced puppies long before the disease causes problems in the parents. This disorder is caused by an ancient canine genetic mutation likely arising in a common ancestor of today’s breeds and has been identified in over 100 dog breeds. In one study, 5.3% of beagles were found to be carriers of this mutation and 3.5% were affected.

Coagulation Factor VII Deficiency is a typically mild disorder of blood clotting. Affected dogs have a deficiency of a protein important in blood clotting resulting in easy bruising and nosebleeds. Given the mild clinical signs, some affected dogs may not be identified until a surgical procedure or traumatic event when dogs show signs of prolonged, excessive bleeding. Most dogs will have a normal lifespan despite their tendency for increased blood clotting times. The incidence of this disease in the general beagle population is unknown.

Dogs affected with primary open angle glaucoma typically develop increased eye pressure in both eyes between 8 and 16 months of age. As the pressure increases, the dog’s eyeballs typically increase in size and become painful which can be identified by blinking, tearing, and redness. Eventually, increased eye pressure results in damage to the retina and optic nerve resulting in loss of vision. Frequently, affected dogs also develop dislocation of the lens (often by 2 ½ years of age) resulting in further increase of eye pressure and exacerbation of vision loss. The incidence of this disease in the general beagle population is unknown.

Paw Print Genetics also tests for the rare disease, osteogenesis imperfecta (also known as brittle bone disease) and progressive retinal atrophy, cone-rod dystrophy 4 (PRA-crd4) in beagles. In the study that identified a mutation for PRA-crd4 in beagles, it was found that the insertion mutation present in the breed was at the same location in the genome, but longer than the mutation of other breeds with PRA-crd4. Though beagles had a mutation at the same location, had decreased electrical response on an electroretinogram, and showed signs of mild retinal disease on ophthalmologic exam, the dogs displayed clinically normal vision. Though likely in at least some cases, it is unknown if beagles inheriting this mutation develop clinical vision loss or blindness. In addition, the causal mutation for pyruvate kinase deficiency in beagles has been discovered, but testing for this condition is not currently available at Paw Print Genetics. Other beagle diseases with a suspected inherited component for which the causal mutation has not yet been identified include hip dysplasia, beagle pain syndrome, epilepsy, cherry eye, chondrodystrophy (dwarfism), and various cancers.

All diseases caused by known genetic mutations discussed in this blog are inherited in a recessive fashion, meaning that affected dogs must inherit one copy of the causal mutation from each parent in order to develop disease. Dogs inheriting a mutation from only one parent are considered carriers and do not show clinical signs of disease, but can produce affected puppies if bred to another dog carrying the same mutation. By using genetic testing technologies to identify dogs carrying disease causing mutations and performing selective breeding, these inherited diseases can be eliminated or greatly reduced in incidence, thus, keeping the beagle as popular and desirable as ever!

Inherited Diseases of the Border Collie

Degenerative Myelopathy: Should you be concerned for your breed?