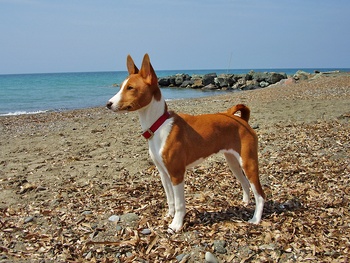 Basenjis are an ancient, charming and unique breed originating in Africa. According to the Basenji Club of America, dogs resembling basenjis have been found in African cave paintings and Egyptian art dating back to between 1000 and 6000 BC. In the late 1800’s, the German botanist and ethnologist, Georg Schweinfurth described a domesticated dog closely resembling the Basenji belonging to native people of central Africa that he had encountered on his trips to the region. Shortly after this description was published, dogs resembling Basenjis were exported from Africa and displayed in Great Britain and Berlin as “Lagos Bush Dogs” and “African Bush Dogs” respectively. Despite their unique and desirable characteristics (such as their yodel-like vocalization known as a baroo), basenjis are similar to other dog breeds in the sense that they are known to inherit a handful of genetic diseases that can cause significant issues in breeding programs. Luckily for the basenji, genetic tests are now available through Paw Print Genetics to help breeders prevent future generations of dogs from being born with some of these preventable illnesses. The two inherited disease tests recommended by the Basenji Club of America and of great importance for basenji breeders have been the tests for the diseases known as Fanconi syndrome and a particular type of progressive retinal atrophy (also known as “basenji retinopathy”).

Fanconi syndrome is a late onset kidney disease marked by excess excretion of nutrients and electrolytes in the urine combined with chronic kidney failure. One common and important clinical finding in affected dogs is increased urine glucose measurements despite normal blood glucose levels. Dogs affected with this disease frequently develop signs of chronic kidney failure beginning around 4 to 8 years of age including increased drinking and urination, poor hair coat, weight loss, and eventually, death, with a median survival time after diagnosis of about 5 years. Though treatments exist to potentially delay disease progression, there is not a cure for this disease. The exact frequency of Fanconi syndrome in the basenji population is unknown, but one study found that 10% of 959 basenjis studied were affected with the disease.

Progressive retinal atrophies (PRA) are a group of inherited diseases marked by degeneration of the retina and subsequent blindness in a wide variety of dog breeds. Though there are numerous causal genetic mutations and significant variability in age of onset and disease characteristics associated with each type of this disease, the type of PRA that basenjis inherit is a late onset retinal degeneration which can typically be diagnosed during a veterinary eye exam at around 5 years of age. Rod photoreceptor cells of the retina are lost first, resulting in night blindness. Loss of vision in daylight is variable from dog to dog in this type of PRA with some dogs maintaining daylight vision for the remainder of their life while others progress to complete blindness due to degeneration of their cone photoreceptor cells. A significant concern in both Fanconi syndrome and the PRA of basenjis is their late age of disease onset. Affected breeding dogs with either condition will have likely been bred by the time diagnosis is made; thus allowing the offspring to inherit the causal mutations without breeders knowing the parents were affected. Therefore, genetic testing of dams and sires prior to breeding is crucial in eliminating these diseases from blood lines.

Though the diseases discussed above are two of the biggest inherited disease concerns for basenji breeders, Paw Print Genetics also offers tests for pyruvate kinase deficiency and spinocerebellar ataxia in the basenji. Mutations associated with these two other inherited diseases have also been identified in the basenji and should be considered for any reputable basenji breeding program. Ancient in their origins, the use of modern genetic testing and informed breeding are ushering the basenji into a healthier, happier future for the breed and the people that love them.

Philanthropy and Research: Going Beyond Canine Genetics in Our Community

Paw Print Pedigrees: All About the Breeder Page