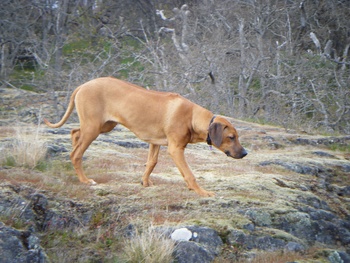 Large, muscular dogs, Rhodesian ridgebacks trace their ancestry to southern Africa, and it includes hunting dogs, guard dogs and semi-domesticated tribal dogs. The ridgeback is notorious for two things: first, as an athletic lion-hunting dog that could chase down and keep lions at bay until hunters showed up to make the kill, and second for the ridge of hair on their back that runs counter to the rest of the dog’s hair.

With roots that begin in present-day South Africa and Rhodesia, the ridgeback descends from semi-domesticated hunting dogs of the Khoikhoi people. These dogs possessed a line of hair that ran against the direction of the rest of their hair, creating a “ridge” along their backs. These fierce dogs were noted for their guarding abilities. Dutch settlers eventually brought European dogs with them – including greyhounds, bloodhounds and great Danes – which were bred with these indigenous dogs of South Africa. This crossing resulted in the Boer hunting dog, which continued to possess the ridge of hair along its back, and which was eventually taken to neighboring Rhodesia, where it was bred with other hunting dogs. The results of these pairing established the foundation for the ridgebacks – athletic dogs that were reddish in color and possessed the ridge of hair.

These dogs were used to hunt, chase and hold lions at bay until horse-backed hunters could arrive to kill the animal. The dogs were courageous, strong and intelligent. They were also used to hunt other big game, including wild boar and baboons. The dogs eventually made their way to Europe and then America, where they are recognized as a hound.

With beautiful coats that can vary from light wheaten to red wheaten, the distinctive ridge of hair on their backs is typically two-inches wide at its greatest point, and extends from the shoulders to about the hips. They way from 70 to 85 pounds, and stand 27 inches tall at most; males are larger than females. Ridgebacks are loyal (very much “people dogs” who like to be close to and do things with their family), intelligent and athletic dogs that require daily exercise, and because of the guarding heritage, they can be somewhat aloof with strangers and protective of their household and family members. Because of their use as largely independent hunters, ridgebacks can possess a strong-willed personality that can sometimes prove challenging for novice trainers. Since their early inception, the breed has never responded to heavy-handed training; keep it positive.

The Rhodesian ridgeback is susceptible to most large-breed issues, including bloat and hip and elbow dysplasia. Thyroid issues have become an issue within the breed as well. They also have a couple of genetic mutations within the breed (not counting the genetics of the ridge of hair along its back).

At Paw Print Genetics, we have three mutations that can be screened for when it comes to Rhodesian ridgebacks. Those include: degenerative myelopathy, hemophilia B and the dilute (D-locus) coat color testing. If you’re thinking about buying or breeding a Rhodesian ridgeback, you need to select your puppy or the mate from genetically sound stock – a dog that is clear of debilitating diseases and that has correct skeletal structure.

Genetics 101: Dominant and recessive traits in your dogs