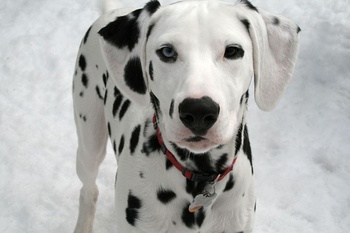 It is no secret among many Dalmatian owners and their breeders that their beautiful breed is prone to developing bladder stones (uroliths) made of urates as they have historically been the poster puppies for the inherited condition, known as hyperuricosuria. However, many don’t realize that the same genetic mutation responsible for these stones has been reported in over a dozen breeds of dog, although at a much lower frequency.

Urates are formed from uric acid, a product of the breakdown of natural compounds of the body and from our food, known as purines. Affected dogs are predisposed to the formation of these bladder stones due to a mutation in the SLC2A9 gene1; a gene that serves as the blueprint for a protein responsible for transporting uric acid in the body. In dogs free of this mutation, this transporter plays an important role in transporting uric acid from the blood into the liver for degradation and from urine produced in the kidney, back into the blood. Affected dogs cannot perform these tasks adequately, thus resulting in a high level of uric acid in both the blood (hyperuricemia) and urine (hyperuricosuria). The disorder is inherited in an autosomal recessive fashion meaning that individuals must inherit two copies of the disease causing mutation (one from each parent) in order to develop the disorder. Though all affected dogs excrete elevated amounts of uric acid in their urine, only a subset of them actually form stones. The jury is still out as to why some affected dogs tend to be more prone to stone formation than others, but the discrepancy may be related to interplay of the SLC2A9 mutation with other genes or environmental factors, such as individual differences in water consumption.

Hyperuricosuria causes disease when urate crystals (which saturate the urine of affected dogs) form stones in the kidneys, ureters, bladder, or urethra. Though stone formation in any of these locations can cause signs of disease, urate stones most frequently cause issues in dogs when they form or lodge in the urethra of male dogs or in the bladder of either sex. The urethra of male dogs is longer and narrower than those of their female counterparts, predisposing them to dangerous urinary tract obstructions that should be considered a medical emergency. Dogs with untreated obstructions will die within a few days, most often due to dangerous accumulations of potassium in the blood (hyperkalemia). Stones present in the bladder can also cause significant discomfort. Signs of bladder stones are similar to signs of urinary tract infection; blood in the urine, frequent urge to urinate small volumes, and straining to urinate (the most common sign of urinary tract obstruction as well).

Historically, 100% of Dalmatians carried two copies of the SLC2A9 mutation, thus making them the most well recognized of the breeds to develop the condition. In the 1970’s, a controversial breeding program, now termed the “Dalmatian Low Uric Acid Project”, was undertaken to reintroduce the normal variant of the SLC2A9 gene (which was unknown at the time) back into the Dalmatian breed. A champion pointer (one of the closest relatives of the Dalmatian) from a bloodline with normal uric acid excretion was used as a sire in the project. Early offspring of the breeding program had smaller spots in their hair coat than traditional Dalmatians that also contained interspersed white hairs. However, after four backcrosses, the puppies produced where nearly indistinguishable from other Dalmatians and had normal metabolism of uric acid. In 2011, the AKC approved registration of Dalmatians descending from this backcrossing project, thus providing Dalmatian breeding stock with low uric acid levels that could be passed to future generations, thereby improving the health of the breed. However, Dalmatians of this backcross project will likely need to become proven competitors in the conformation ring before widespread acceptance of their bloodline occurs.

Prevention of urate stone formation has historically involved use of a medication called allopurinol in combination with prescription dog foods specifically formulated with low purine content. However, since the discovery of the disease causing genetic mutation in 20081, modern prevention can now include genetic testing of dams and sires and implementation of this information in breeding programs to prevent offspring from inheriting two copies of the associated mutation. Expensive surgical interventions are common in dogs with bladder stones. Since these surgeries only treat the symptoms of hyperuricosuria, dogs still run the risk of developing new stones after surgery. In some cases, dogs require multiple surgeries during their life time to deal with complications of this condition. For this reason, genetic testing of breeding animals is a logical and incredibly cost effective option that allows for complete prevention of urinary stones. A cost analysis of hyperuricosuria related expenses can be found here.

Breed of the Week: Pomeranian

Breed of the Week: Siberian Husky