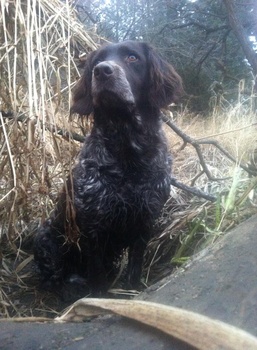 The Deutscher wachtelhund, or German spaniel, is a medium-sized, thick-boned, muscular gun dog with a thick wavy coat that protects it from briars and cold water. While they’ve been around since the 1700s, they’re a little-known versatile gun dog in both the United States and its home country of Germany.

In the U.S., the wachtelhund was recognized by the UKC in 1996, and the breed standard was published in 2004. The AKC is currently accepting applications for its Foundation Stock Service, which requires acceptance from a domestic or foreign registry. In the case of the wachtelhund, that registration comes from the German Wachtelhund Club, which oversees the Deutscher Wachtelhund of North America, and has very strict criteria for acceptance. In Germany, the wachtelhund has only been allowed to be owned by hunters, gamekeepers and foresters – few citizens even know of the breed.

While the wachtelhund has a spaniel look (in both size and appearance), and they do flush feathered game, they are a versatile breed that is expected to hunt not just birds but also furred game such as rabbits and foxes – and even bigger game like stag and wild boar. They tend to air scent, with heads held high, when game is at a distance and then track with nose to the ground when pursuing foot or blood scent. Wachtelhunds can work the uplands as well as water – and they are expected to retrieve game in either venue. They live to hunt, and that is by design.

In Germany, only professional hunters, gamekeepers and foresters may own wachtelhunds, and there is strict criteria to be met before two dogs are allowed to breed – and that oversight has extended to America. Before breeding can take place in Germany, prospective dogs must be entered in a juvenile hunting test by 18 months of age, and then must enter three other levels of hunting tests, as well as a versatile hunting venue. That consistency, which has placed the dog only in hunting homes in the U.S., has ensured the continued historic use of the dog as a hunting companion and has kept any sort of split from occurring due to the show ring.

While they are tenacious hunters, who prefer to hunt in coordination and one-on-one with their owners, wachtelhunds are also great companions with an affectionate and friendly personality who enjoy being around people.

Wachtelhunds are medium in size, ranging from approximately 18 to 22 inches and weighing 44 to 66 pounds. According to the standard, they come in two colors: brown and white, or “schimmel,” and solid brown. The schimmel coloring ranges from red to dark with white ticking or dogs with large or small solid brown and white patches. The solid-colored wachtelhunds will produce colors that include orange, blond, red and dark brown.

In addition to strict hunting criteria, the German club requires breeding pairs to submit x-rays and veterinarian verification proving that each dog is free of hip dysplasia. At Paw Print Genetics, we offer glycogen storage disease VII (Group A) for the wachtelhund. In fact, a Paw Print Genetics’ client, Blue Moon Wachtelhunds, has the first genetically tested breeding pair in the U.S.