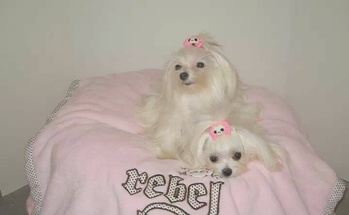 An ancient breed with a somewhat muddled history, the modern Maltese is a companion dog that has maintained its regal appearance and lovability.

The small, long-haired white dog weighs less than seven pounds (ideally four-to-six pounds) and stands seven-to-12 inches at the withers. Their long hair is silky white and lacks an undercoat. Regular grooming is required to keep it from matting, but by keeping the small dogs’ hair clipped in a “puppy cut” the maintenance can be reduced.

While the Mediterranean island of Malta is the origin of the dog’s name, the breed’s exact origin is somewhat in lost. Popular belief is that it originated in the central Mediterranean area, but there is some evidence to suggest that it came from Asia and made its way to Europe with nomadic traders.

A very old breed, Maltese-like dogs have been cited in writings since 500 B.C. Throughout history, Maltese have been linked to royalty and the affluent, including the philosophers such as Aristotle, Pliny the Elder and Strabo, the Roman Governor Publius of Malta and Queen Elizabeth I. The AKC says that even in the 1500s, the little white dogs sold for as much as $2,000!

Maltese have been companion dogs almost from the outset (early versions of the breed might have been used as ratters, but those days are long past). As such, they are happy, cuddly and lively pets that love to play and entertain, and thrive on attention. As small dogs, they don’t require large expanses to roam or great amounts of exercise – they do great in apartments and can be comfortably carried in handbags around town. They are, however, a vocal dog, and will bark incessantly at strangers and sounds that alert them.

As small dogs, they are relatively healthy, and enjoy a lifespan of 12 to 15 years. Cosmetically, the Maltese’s white coat can be susceptible to tear stains around the eyes. More of a concern are genetic issues. The small dogs are notorious for having dental issues – with cavities a real problem. Owners are often required to brush their teeth regularly, and some have even been known to use braces to fix their misaligned teeth.

At Paw Print Genetics, we offer a panel test that screens for two known genetic mutations in the Maltese. Congenital macrothrombocytopenia is a blood disorder that can cause misdiagnosis of other diseases that cause low blood platelet levels. Glycogen storage disease Ia is an inherited metabolic disorder known to affect Maltese dogs. Glycogen is the primary carbohydrate used by the body for energy. Affected dogs do not have sufficient enzymes to break down glycogen and it then accumulates in the organs of the dog, including the liver, heart and kidneys. Symptoms present very early in life and include failure to thrive, lethargy, low blood sugar, enlarged liver, coma and eventual death in less than 2 months from disease onset.