Tweet
by Martine Huslig on April 6, 2013 in Trixie's Paw Prints 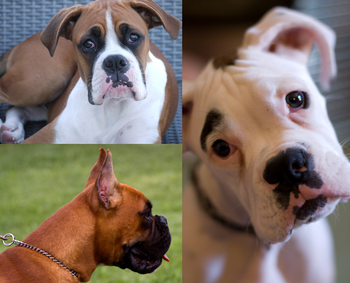 Many people have misconceptions about genetic terms and what these terms mean related to the inheritance of a health issue in a dog, a family of dogs or a breed. I wanted to take a moment to step back and discuss some of these commonly used terms to help people understand them more clearly.

When an individual has one copy of a mutation and one normal copy and is unaffected (doesn’t show any signs of disease), they "carry" the gene and are called "carriers". This occurs most often with autosomal recessive disease. With an autosomal recessive disease, this heterozygote has one copy of the "normal" gene and one copy of the mutation. The phenotype is normal but the genotype is that the dog is a carrier and will potentially produce the condition if bred to another carrier of the same recessive mutation. Again, for the recessive condition to be present phenotypically, an individual must have two copies of the mutation. Many people will look at a dog that may carry a recessive allele and say things like I mentioned in my last blog; "that dog is so black, he must not carry the ability to produce fawn (ie sable or tawny) or "you could tell she was pale in color, therefore you knew she carried a dilute gene". There are many different variations on these statements that are commonly made but, this is not how recessive inheritance works. If you can recognize a heterozygote without special testing then it is not a recessive gene, it is more likely to be dominant. No matter how people try or hope to speculate, you cannot "see" carriers. Most of the hundreds of gene mutations currently indentified in dogs are recessive and cannot be identified without special testing like the genetic testing provided by Paw Print Genetics™.
For recessive disease, both parents must be carriers in order to produce affected puppies. These affected puppies have inherited an allele with the mutation from each parent. Each parent of a puppy affected with a known recessive condition is a carrier (called an obligate carrier). Autosomal recessive conditions typically affect males and females equally.

A dominant disease can be expressed in heterozygotes (individuals with only one copy of the mutation). Such an individual can produce affected offspring by passing on this one copy of the mutation even though the other parent passes on a completely normal allele. One parent is most likely responsible for producing the condition if the condition is due to a dominant gene. Such a condition can be present in multiple generations but not all individuals that produce the condition will necessarily be affected themselves. Because some dominant genes have decreased penetrance, not all dogs with the dominant gene will be affected. The penetrance of a gene is typically represented in a percentage. A gene with 50% penetrance means that 50% of the dogs with the gene will be asymptomatic and 50% will show the condition. Just because these individuals are asymptomatic does not mean their offspring will be unaffected when they pass on the gene. Expression of the dominant black coat color allele, K (and any expression of black coat color) is inhibited in breeds like the Labrador retriever to produce yellow labs by the recessive ee gene. When these dogs with "decreased penetrance" of black coat color allele are bred to EE dogs, their puppies will all be black.

A dominant allele may be a complete/pure dominant, a semi/incomplete dominant, or the two alleles can be co-dominant. If heterozygotes and homozygotes present in the same way, then the allele is a complete dominant (rare in human medicine but occurs with dominant black coat color in dogs). Most commonly homozygotes for a dominant gene present more severely or significantly than heterozygotes. Homozygotes for the autosomal dominant hairless gene in Chinese Cresteds and Mexican Hairless do not exist in life. With the dominant allele that causes the short legs characteristic in many breeds like Dachshunds and Corgis, homozygotes have shorter legs than dogs that are heterozygous for this gene mutation (See this publication). A co-dominant gene means one allele is not clearly dominant over the other. This is technically the case for Boxers that are predominantly white versus predominantly brown. Heterozygotes are "flashy" colored Boxers that are a mixture of brown and white. This is illustrated in the 3 Boxers pictured.

Other important terms are complex, multifactorial and polygenic. The term polygenic is frequently used in the dog world and some people will mistakenly say there are polygenic genes. There are polygenic conditions where multiple genes contribute to the phenotype, but each of the genes contributing to a polygenic trait like coat color is inherited in a recessive, dominant, or X-linked pattern. Complex or multifactorial inheritance applies to conditions that clearly have a genetic component by occurring more frequently within families, but they do not follow a classic pattern of inheritance. These most likely occur due to alleles at more than one locus in combination with environmental factors. Many autoimmune conditions can be considered complex with a not yet clearly understood genetic component to their occurrence.

Hundreds of single gene disorders have been identified in dogs and thousands in humans. All of these genes and terms thrown together can become very complicated and confusing and any of the phenomena above can potentially be at play with a given disease in a pedigree. Genetic testing available at Paw Print Genetics™ can help untangle the genetic mystery of these potential genetic contributions. Genetic counseling is also available at Paw Print Genetics™ to assist you in understanding the genetic health of your dog toward the goal of using this genetic information to produce the healthiest dogs possible.

A New Way to Neuter Dogs