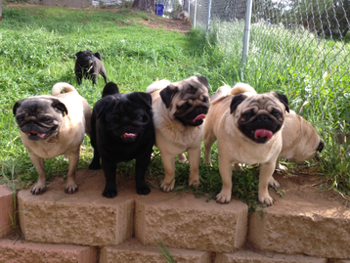 To start with the second scenario, millions of sperm are swimming as hard as they can to fertilize the eggs. Roughly 50% of these sperm carry an X chromosome (and will produce a female) and roughly 50% carry a Y chromosome (and will produce a male.) So although the male "determines the sex" by passing on an X or a Y to the offspring, the probability of males and females is equal: 50%. But the sperm cannot and do not coordinate with each other to produce exactly 50% males and 50% females. Variations in the male/female ratios of puppies are random and are expected to occur. It is similar to flipping a coin. Flip a coin 5 or 10 times (depending on how many puppies are typical in a litter of your breed). Every time you toss heads assume that heads is a female and tails a male. See how often most (or all) of the puppies are females (or males.) Of course I have personally found that Murphy's Law tends to prevail and if you have 10 people who want boys you will have a litter of all girls!

The first scenario expects exact results instead of the variable results that are expected. This is a common misconception. If 25% are expected to be affected when the litter is at risk for a recessive disorder, then if there are 8 puppies, 2 will be affected and 6 will be fine (4 carriers and two normal, non-carriers). Or at least that is what we should expect to see. Right? No, not exactly. Each puppy has a 25% chance to be affected; just like flipping the coin. This 25% chance is independent in each puppy. So we might see the expected outcome of 2 and 6 but we might see many other outcomes. The reality could also be one affected or five affected out of the 8. With a dominant condition, 50% affected and 50% normal results are expected. However, as illustrated by our pictured passel of Pugs, the gene creating black (K) is dominant, but this particular litter did not show 50% black. This is because each puppy has an independent chance of inheriting the dominant gene. Thus, the litter could have been all black, all fawn or a mix as shown here, but a mix that is not 50% black and 50% fawn.

Black is a visual ‘phenotype’ that we can see. Most genes are not so easily identified. For instance, some people might look at one of these black Pugs and say, "he is so Black, there is no way that he carries the ability to produce fawn." But, there is no way to just look at a dog and identify the presence or absence of a recessive gene.

In the case of affected puppies, these are recognizable even though the exact condition they are affected with may not be clear, but carriers of recessive disorders or genes cannot be readily identified. Confirmation via genetic testing offered by Paw Print Genetics™ is invaluable. One, it allows a confirmation of exactly the gene and the condition for which the dogs are at risk. Two, it allows people to identify exactly the percentages that they have in a new litter (rather than what was possible.) It removes the guesswork of a dog being from an "at risk pedigree." Without genetic testing, every dog related to an affected dog or from a line where the problem is known to occur, is "at risk." However, some of these dogs will be completely risk free because they did NOT inherit the gene. Single gene defects are all or none, yes or no. Once a dog is tested and proven not to be a carrier, they no longer have the potential risk that was associated with their "probability."

The littermates of a puppy affected with a recessive disorder have a 2 in 3 chance of being carriers (not 2 in 4 because you know they are not affected so you have eliminated one of the 4 possibilities). Carrier testing available though Paw Print Genetics™ will reveal which puppies have no risk of ever producing the condition and which puppies, if bred, must be bred carefully to non carriers in order to avoid producing affected puppies.

Evolution of the Canine

A New Way to Neuter Dogs