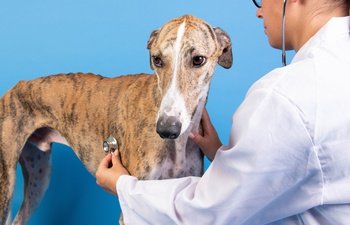 Understanding exactly how a specific disease is inherited by offspring can alter your assessment of disease risk and recommendations for breeding. The most common inheritance types discussed in animal genetics are autosomal recessive, autosomal dominant, and X-linked recessive inheritance. However, less common inheritance patterns may also be seen for some animal diseases. Disease risk in animals inheriting one copy of a disease-associated mutation varies based upon the specific mode of inheritance. For example, dogs carrying one copy of a recessive disease mutation (often called ‘carriers’) are unaffected by the mutation and will not develop the disease. In addition, they are also safe to breed to dogs that are known to be clear of the same mutation without fear of producing affected puppies. However, dogs with mutations associated with dominant or X-linked recessive diseases are generally riskier to breed because they are more likely to produce affected puppies. Unless the disease displays incomplete penetrance (see ‘Disease Penetrance’ below), all dogs inheriting just a single copy of a dominant mutation or all male dogs inheriting one copy of an X-linked recessive mutation are at risk to develop the disease.

Most of the currently known disease-associated genetic mutations in animals are close to 100% penetrant. This means that if an animal has inherited the number of mutation copies necessary to place them at risk, they are highly likely to develop that disease. However, many inherited diseases display a more nuanced phenotype resulting in decreased or incomplete penetrance. This means that some animals that inherit a disease-associated mutation may never actually develop clinical signs. Breeding animals with these types of mutations are particularly concerning because even if parents remain unaffected, their puppies may develop the associated condition. In many cases, diseases displaying incomplete penetrance have other unknown genetic or environmental factors which influence the overall risk of developing disease.

Which Breeds Carry the Mutation?

In many cases, different underlying genetic mutations are associated with a similar or identical disease presentations in disparate breeds. Therefore, to make proper recommendations, it is crucial to know if genetic test results reflect testing for a mutation actually found in that breed. For example, Paw Print Genetics (PPG) currently tests for over a dozen different genetic mutations associated with a group of inherited eye diseases known as progressive retinal atrophies (PRA). Some of these mutations are only found in a single breed, while others may be found in multiple breeds. In addition, some breeds are known to inherit only one PRA-associated mutation while other breeds may be at risk of inheriting more than one mutation that can lead to PRA. This is important to know because testing a dog for a mutation that is only found in a certain breed will likely render a normal (clear) result if tested in a different breed. In actuality, this dog could still be at risk of developing PRA (or producing affected puppies) because it has inherited a mutation that IS found in the breed.

It is increasingly common for animals to be tested using genetic screening tools (like PPG’s Canine HealthCheck) which analyze DNA for many disease-associated mutations from multiple breeds. When assessing results from this type of testing, it is important to identify the specific mutations that were tested. Owners receiving normal test results for all mutations associated with a particular disease (like PRA) may mistakenly assume that their dog has no risk of developing disease, when in fact, the specific mutation known to cause disease in that breed may not be included on that screening test; sometimes because the mutation is not known in that breed.

Which Breeds Are Affected?

Some mutations known to be associated with disease in one breed, do not result in the same level of disease risk for other breeds. For example, a PDK4 gene mutation is a dominant inherited risk factor for dilated cardiomyopathy (DCM) in the Doberman pinscher1 and known to display incomplete penetrance. At PPG, this mutation has also been identified in over a dozen other breeds that are not reported in the scientific literature. In fact, some of the unreported breeds carrying the PDK4 mutation are small breeds for which clinical DCM is considered relatively uncommon. Therefore, the risk of the mutation causing DCM in these breeds remains unknown. Therefore, in breeds other than the Doberman, it may be reasonable to consider keeping dogs with the PDK4 mutation in breeding programs to maintain genetic diversity (see below) rather than removing all dogs with the mutation from breeding consideration. However, if applicable, clinical health clearances prior to breeding (such as an echocardiogram for DCM) may be appropriate when a dog has genetic mutations known to be a disease-related concern in other breeds.

Individuals do not only carry disease-associated genetic mutations. They also carry unique or rare benign genetic sequences that increase the overall genetic diversity of their population. Numerous studies have linked low genetic diversity in breeds (and high coefficient of inbreeding) to increased rates of recessive genetic diseases, shorter lifespans, smaller litter sizes, slower puppy growth, and higher neonatal mortality. By definition, breeders of purebred animal lines no longer allow for the interjection of genetic diversity from non-pedigreed animals into their populations. Therefore, significant increases in genetic diversity within a purebred population can only occur over many generations as random mutational events and genetic recombination result in unique genetic sequences within individuals. In contrast, massive losses of genetic diversity can occur within a single generation when a population is subjected to a genetic bottleneck, such as what can occur if breeders choose to remove a large number of individuals from the gene pool due to a genetic mutation. Therefore, in cases where a disease-associated mutation is found with high frequency in a population, the practice of slowly eliminating the mutation may be preferable to rapid elimination.

As mentioned earlier, it is common for breeders to safely breed carriers of a recessive mutation to animals that are clear of the same mutation. In fact, this practice plays an important role in populations by facilitating retention of the genetic diversity present in mutation carriers. However, in diseases caused by a common mutation, this practice alone may not be enough to protect genetic diversity in the population. In these circumstances, breeding dogs with two copies of the mutation to clear dogs, should also be considered, even though dogs with two copies of the mutation may be at risk for or affected with the disease.

For example, In a study published in 2013, 359 randomly selected golden retrievers from France and Switzerland were tested for a PNPLA1 gene mutation associated with a common, recessive form of ichthyosis2. Of these dogs, 25% (91 dogs) were found to be carriers of the genetic mutation and 16% (59 dogs) where found to have two copies, placing them at risk of developing disease. Given the relatively high frequency of this mutation, golden retriever breeders were cautioned by scientists about the potential genetic diversity loss that may occur if all dogs with the mutation were removed from the gene pool abruptly. In addition to their recommendation to breed carriers to clear dogs (as is common), the scientists also recommended breeding dogs with two copies of the mutation to clear dogs with the goal of slowly eliminating the mutation over multiple generations with minimal impact on genetic diversity. All puppies produced from this breeding would inherit one copy of the mutation. If bred to another clear dog in the next generation, these puppies of affected dogs would then produce clear puppies that could be kept as future breeding stock.

We understand that providing genetic counseling for veterinary clients is not always straight forward, nor a traditional part of veterinary practice. Paw Print Genetics has a knowledgeable team of geneticists and veterinarians who are happy to consult with all members of your veterinary staff, so you can best assist your clients! We even frequently discuss test results from other laboratories! Please feel free to contact us via phone (509-483-5950; Mon. to Fri., 8 am to 5 pm Pacific time) or email (AskUs@pawprintgenetics.com) and let us know how we can help you!

Identifying A Litter of Puppies